Sköll is an Emblem Heartless that appears in Kingdom Hearts III. It is the final boss of the world Arendelle, and Prince Hans' Heartless.

Sköll is an Emblem Heartless that resembles a giant wolf. Its head, shoulders, and front legs are made out of crystallized ice, with its face being opaque white ice, while its shoulders are snowflake-shaped and are made out of translucent cyan ice with opaque white edges. It has solid yellow eyes with black sclera and no irises, and a gray nose. Its shoulders and legs are surrounded by dark blue icicles that resemble bristly fur. The rest of its body, including its tail, consists of a streaming dark black miasma, and its Heartless emblem is located on its forehead.

The Wolf Heads it summons resemble smaller versions of its own head and are also trailed by the dark black miasma, but they lack the Heartless emblem and have swirls in their eyes.

When Prince Hans tries to kill Elsa and is knocked unconscious when Anna protects her and falls victim to the freezing spell Elsa accidentally cast on her heart, the darkness in Hans' heart consumes him and he becomes the Emblem Heartless Sköll, taking Sora, Donald, Goofy and Marshmallow to a dark domain to kill them and steal their hearts. During battle, it summons its Wolf Head packmates and transforms into a gigantic orb of darkness to try and crush Sora and company, but Sora is able to push back the dark orb with Marshmallow's help. Upon defeat, it transforms into the dark orb one last time and detonates itself to try and take Sora and company with it, but Marshmallow takes the blast to protect Sora, Donald and Goofy and survives, merely being harmlessly blown across the lake. Afterwards, Sora and company are out of the dark domain and wake up back on the lake where Elsa and Anna are. 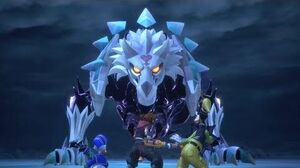