Skaar, Son of Hulk is an anti-hero that appears in Marvel Comics. He has been both an enemy and ally of The Incredible Hulk, who is his father by the warrior princess Caiera.

Skaar was progeny of Hulk and Caiera the Oldstrong. After Caiera's death a cocoon containing Skaar fell into the lake of fire. After a period of time, Skaar emerged from the cocoon, appearing to be the age equivalent to a human preteen. A year later he appeared to have grown to a teenager. He quickly grew into what seemed to be an adult after he was attacked by one of Axeman Bone's dragons, which at first appeared to be an example of his Old Power. Skaar defeated Axeman Bone and his dragon with only a sword and his bare hands. Skaar, after having a confrontation with Princess Omaka, was able to speak intelligent sentences when the group was attacked by Wildebots and the two formed an alliance. After some time, he gained Old Power with the help of his followers. Soon after, he found himself allied with the Red King, who was saved from death and rebuilt with cybernetic parts by Wildebots. After becoming his ally, many of the people who considered him a savior, including Omaka, lost faith in him and allied themselves with Axeman Bone.

With his Old Power, he managed to see the acts of murder committed by everyone on the planet and intended to kill Axeman Bone and his followers, and almost succeeded, but Silver Surfer suddenly returned and took away his Old Power and revealed that Galactus was coming to Sakaar to consume it. He offered Skaar the chance to use the Old Power to revive the ancient technology of the Shadow to evacuate the planet, becoming a hero to the universe as Sakaar would have enough energy to sate Galactus' hunger for a one hundred thousand years.

Caiera's spirit spoke to Skaar asking him to fight for the good of the people of the planet, but he insisted on revenge, consumed with rage over Axeman Bone. Through one final plea of Caiera's spirit, he was asked to give up his rage, but he instead proceeded into battle, with no regard for the innocent. Caiera, using what little of her strength she had left as a spirit, used her Old Power to return in a stone form of herself, then in an image of Hulk. She proceeded to defeat Skaar with ease and asked why he insisted on being a killer instead of attempting to make peace. Skaar then revealed his plan for killing everyone on the planet he deemed evil after glimpsing the destruction of so many others while he briefly wielded the Old Power.

Caiera, offering him one last chance at redemption, forced the Silver Surfer, still being controlled by an Obedience Disk, to strip Skaar of his Old Power and bring him close to Galactus, a being who had killed billions, in order to truly grasp the consequences of his plans. The Silver Surfer sent Skaar back to Sakaar believing he saw things Caiera's way. She returned to being one with the planet, believing Skaar had taken up the Silver Surfer's previous offer to evacuate the planet and returned his Old Power in order to do so. Skaar then unsuspectingly used the Old Power to destroy the Stone Ships, dooming everyone on the planet. He decided that the planet and Caiera's soul were more important than its people. He gave the Silver Surfer an ultimatum, spare Sakaar or he would use the Old Power to increase Galactus' hunger, causing him to consume every planet with the Old Power. The Silver Surfer decided to leave, informing everyone on the planet of Skaar's actions and how they would subsequently kill billions. Caiera returned to him once more and denounced him as her son for his decision and exiled him from the planet. She then absorbed Sakaar's Old Power and awaited for Galactus to consume her.

During the time of Skaar's exclusion from his planet, he was warped to the solar plains of Earth. Mister Fantastic saw his arrival as well as Hulk's presumed daughter, Carmilla Black, foretelling of his gender and name to Norman Osborn. Arriving on Earth, he first attacked a helicopter for killing an innocent coyote. Running off to a desert like region, Skaar came into battle with his aunt, the She-Hulk, and the Fantastic Four, minus Sue Richards due to her holding off his father miles away. Later, a bomb sent by Osborn collided with the area the Fantastic Four battled Skaar in and sent him miles away. Transformed into what seemed to be his human form, Skaar was left in the wilderness. In his human form he met and befriended two local children. One of the siblings injured himself on a cliff and the younger sibling rushed to nearby police for help. Mistaking Skaar for a threat, one of the officers tasered him and proceeded with arresting him, provoking him to transform into his original form, causing his presence to be felt by his father several miles away. After running into and attacking the Warbound (Earth-616), Skaar asked how to kill his father. As the Green Scar appeared immediately to confront him, Kate Waynesboro stated that you don't.

The Green Scar confronted Skaar in battle. The Warbound initially decided not to interfere, but decided to as Kate pointed out their battle was going to endanger a nearby power plant. Korg tried to calm the Green Scar down but was instead assaulted, grabbed and hammered against Skaar. Afterword Korg told both of them to state their grievances. Skaar stated why he wanted revenge on the Green Scar was because he felt he and his world were abandoned to death by the Green Scar. The Savage Hulk responded to this, shouting while he kept talking. Skaar, disgusted with his father's diminished intelligence asked if he even knew who he was. Hulk exclaimed that he was Hulk, the Strongest One There Is. Skaar, even further disappointed, claimed he had come to kill a king, not a fool. Hulk then grabbed Skaar's face and began to remember Caiera and became World Breaker once more, but was pushed back into Banner's mind and regressed back into the Savage Hulk. Skaar, wanting the Worldbreaker to return was quickly ignored by the Savage Hulk and left. The Warbound were trying to stop a nuclear catastrophe at the nearby plant when they were unexpectedly aided by Hulk and subsequently Skaar. Skaar, using Old Power, sealed the plant and saved the workers. Elloe asked why he used his sword when he had the Old Power. Skaar responded saying it was more fun, while impaling Hulk. Skaar then left claiming he would come back when the Green Scar would.

Skaar later encountered Banner, who had been robbed of the ability to become the Hulk by the Red Hulk. Banner offered to teach Skaar how to kill the Green Scar, should he ever return, and proceeded to pick a fight between Skaar and Juggernaut to help him prepare for this confrontation. Skaar managed to win his first staged fight by throwing Juggernaut into open space, proving to his father his ability to use his physical strength with his intelligence.

As a second lesson, devised to grant the still naive Skaar the ability to discern friend from foe, and confront his legacy as the Son of Hulk, Banner used the recently met Wolverine to bring Daken and Skaar together. After a friendly conversation, Skaar apparently asked Daken to kill him, forcing Banner to separate the two with a prompt Fastball Special. The two fathers proceeded to separate their offspring, noting to them how strange their parenting seemed.

Meanwhile, Victoria Hand and Moonstone, still in Ms. Marvel garb, lured Banner and Skaar near an installation seemingly meant to siphon away his Old Power. At first taking Hand and Sofen as his hostage, he freed the two women, gleefully acknowledging their real plan: rather than stripping him of his heritage, they wanted to recharge Banner's physiology, accelerating the rebirth of the Hulk. Banner froze Skaar's childlike glee, noting that Skaar would still need training for his revenge.

Skaar later assists Banner and A-Bomb when fighting the Harpy. It turns out that the Harpy that attacked them wasn't Betty, but Marlo Chandler-Jones mutated into the Harpy by the Leader

Skaar and Banner later fought Tyrannus when he and his Moloids invaded Manhattan. After defeating the Moloids, Skaar was proclaimed a hero. After Banner speaks to his secret partner, the Red Hulk, the Green Hulk is in Latveria battling Dr. Doom. The two duel for a bit before Doom prepares to strike down Hulk. Suddenly, Skaar bursts onto the scene and takes on Doom, with Doom overwhelming him with magic. When Doom holds Skaar's sword up to Hulk's neck, he blasts the distracted Skaar and prepares to kill him, reminding him that this Hulk is a robot. Banner comes through and neutralizes Doom's ability to use his armor and remember his spells, and saves Skaar from being killed. Skaar still refuses to trust Banner and angrily shrugs him off when Banner tries to reach out to him. He next went to aid the Avengers against Red She-Hulk. At first being overpowered by Red She-Hulk and losing Hank Pym in the process Skaar and Banner create a new team of Avengers to help break into the Intelgencia helicarrier. Once broken into he is forced to again battle Red She-Hulk who then overpowers him. But he is protected from her by Banner and after the Intelligencia use the Cathexis Ray Generator and Skaar is shot out of the Helicarrier and fights the Hulked-Out Heroes and protect Bruce from the Red She-Hulk by stabbing her, and to his, Rick, and Bruce's surprise she turns into Betty.

After this revelation he was sent by Bruce to battle the Hulked out heroes with Red She Hulk and A-bomb. After they were cured by Bruce absorbing the cathexis ray energy their was a big explosion and the Hulk walked out angrier then before and Skaar said with an evil grin "Finally" with Red she Hulk looking in horror. After the Hulk turns away from Skaar telling him that he never met Caiera, Skaar brags about feeding the planet Sakaar to Galactus. This enrages his father to the point that he goes insane with rage. Skaar was shocked to see his father thunderclap a large amount of sand to save civilians when Skaar is about to say something his father yells his normal catchphrase "JUST LEAVE ME ALONE!" and Skaar tells his father that he (The Hulk) is not a monster and that him and Banner should work their problems out now. When Skaar transforms into his child form and is crying when Red She Hulk tells Bruce he has to hug his son, but Bruce is afraid since the whole fight he saw himself as his own abusive father and Skaar as him. In the end they hug it out and cry as father and son.

Skaar joined Norman Osborn's new team of Avengers and helped them fight the New Avengers. However he might have had ulterior motives since after finding out that the Dark Avengers had captured Captain America, he shouted "Avengers Assemble!" and knocked the Dark Avengers out. It was revealed that Skaar had been reporting to Steve Rogers all along, acting as his double agent on the Dark Avengers.

After the Thunderbolts went missing in the time stream, the Dark Avengers were recruited as a replacement team. They were implanted with nanites in order to prevent them from going rogue, and placed under the leadership of Luke Cage. Skaar was asked to join the team by Luke Cage who wanted someone to watch his back in case the Dark Avengers went rogue. 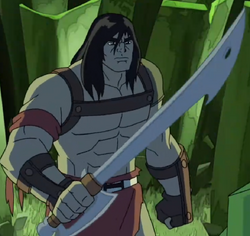 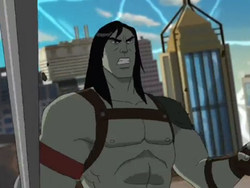