Warrior and Second-in-Command, later General, of the Hypnobrai Tribe

Snake King of the Serpentine

Being the best and the top of all.

Getting only his way.
Hypnotizing and brainwashing his victims.

Become the ruler of Ninjago. (formerly).

Redeemed Usurper
Skales is a major character in LEGO Ninjago: Masters of Spinjitzu. He was originally a warrior and the second-in-command who eventually became the Hypnobrai Tribe's general, and later, the new Snake King of the Serpentine.

He was voiced by Ian James Corlett, who also voiced Master Chen in the same series.

Season 1: Rise of The Snakes

In this season, he appeared as the general's second-in-command and main warrior. All the Hypnobrai wanted him to be the general so they had made with Skales an evil plot. Skales' evil plot was to fight their general Slithraa, to become general and to get rid of Lloyd Garmadon. Lloyd tried to attack with the Fangpyre Snakes well the two tribes, Fangpyre and Hypnobrai united and ranked Skales as they snake king. Lloyd then rescued all the other snake tribes well also they did not listen to his orders so Lloyd had no other choice just to turn into one of the ninja's. after a while, Pythor promised Skales that if Skales would help him to win in the Venom Pit fight Skales will control more tribes of the snake and be his main vise. Skales knew that Pythor's evil plan is to rescue the Great Devourer and that if Pythor would be swallowed by the Devourer, he would have a chance to be the snake king again. Skales helped Pythor to win the Venom Pit and the promise was accepted. Later, Pythor got swallowed and Skales took his chance to be the new snake king.

Season 2: Legacy of the Green Ninja

Skales became the new snake king until Garmadon disturbed and took away from Skales all of the snakes except for his loyal generals. Skales plotted to take Lloyd Garmadon to prison cause he knew that it's Lord Garmadon's weakness and if he would succeed with his plan he will be the snake king once and for all. but his plan was failed and he went to prison instead of Lloyd Garmadon.

Later, he was out of prison and he pushed Lord Garmadon onto the lands of the dark island from a helicopter. Skale's turned in to the current and 4th snake king. after trying to attack Ninjago City, causing also a little earthquake, he found a room with some stone warriors and fought against them. he got locked under the ground in the prison of the Stone Army.

Following the Overlord's defeat-which the Serpentine were aware of but remained underground for-Skales and his people made the tomb of the Stone Warriors their new home. Skales found himself a wife - a purple Hypnobrai- and the two had a son whom they named Skales Jr. After New Ninjago City's power was knocked out, Skales left the tomb to go grocery shopping and returned to find the Ninja -minus Lloyd - waiting for him. Skales soon explained that the Serpentine had adopted a new way of life, seeking to care for the next generation and vowing never to return to the surface again.

Skales and his fellow Serpentine shared with the Ninja the tale of the Golden Master, a feared to be of legend who would possess the power of the First Spinjitzu Master. Their cavern was then attacked by the Nindroids, but the Ninja was able to defeat them after discovering that they were powered by Electrobrai. Learning that Lloyd was in danger, the Ninja asked if Skales would join them, but the Hypnobrai refused. However, he did inform them that he knew of only one Serpentine who utilized Electrobrai: his former master, Pythor.

Skales briefly appears in the crowd with his son as Zane addressed to them near the Titanium Ninja statue during the events of episode The Corridor of Elders, then later at the Corridor of Elders when a Cultist mecha tried to slice him, the rebuilt Bounty's anchor crushes it and he said he never thought to be happy seeing the ship again.

Skales as a warrior. 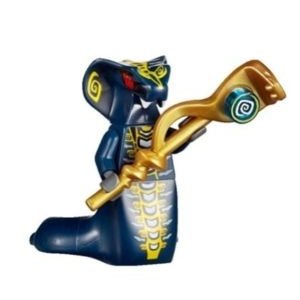 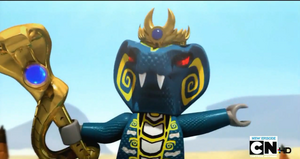 Skales as the snake king. 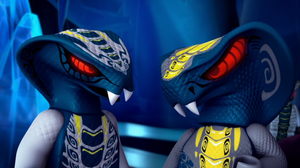 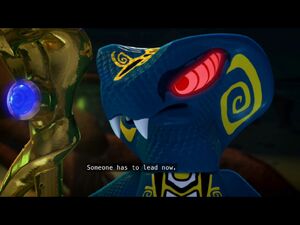 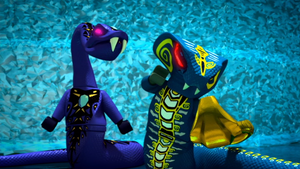 Pythor P. Chumsworth screaming at Skales, "GET YOUR HANDS OFF ME!!" 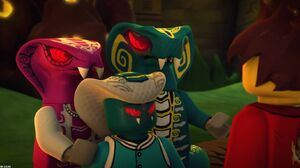 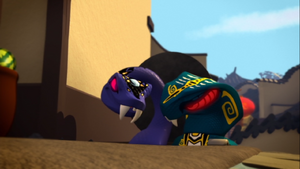 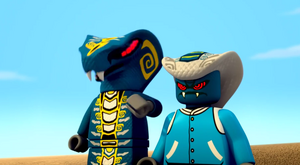 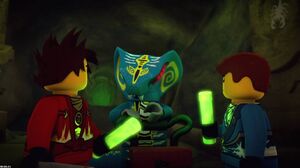 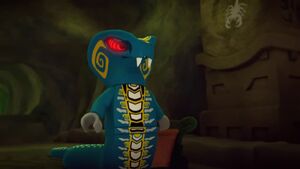 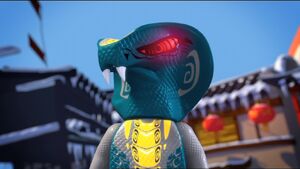 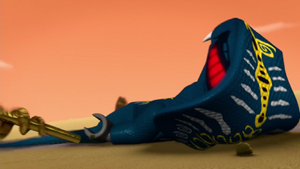 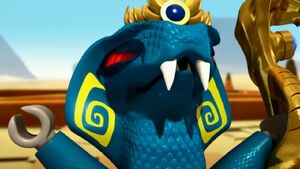 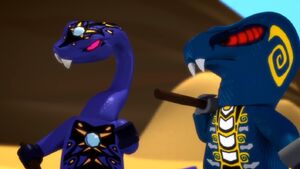 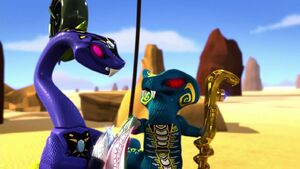