Concealing his IP address from being tracked

Using satire to set people against each other
Compatibility
Manipulation
Intelligence

Become a world famous troll by harassing all women and girls (succeeded; gave up).

Put an end to TrollTrace.com and stop them from exposing everyone's internet history (succeeded).

SkankHunt42 (real name: Gerald Broflovski) is the protagonist villain of South Park Season 20, being the main antagonist of the first half. The user of SkankHunt42, Gerald Broflovski, is the husband of Sheila Broflovski and the father of both Kyle and Ike, the latter being his adopted son. However, Gerald becomes one of Season 20's recurring antagonists who enjoys the mad thrill of trolling women and young girls on the Internet.

He was voiced by one of the show's creators, Matt Stone.

The user of the account, Gerald is a member and city attorney of the City Council, who serves as the town's local lawyer. He has handled several matters throughout the show, such as getting Chef's name put forward for the album "Stinky Britches". However, he does tend to abuse his position in power from time to time, as shown in Major Boobage when he broke a law that he just passed regarding the ownership of cats in South Park, Colorado.

In Season 20's premiere "Member Berries", SkankHunt42 is the troll that has been harassing the girls of South Park Elementary on the school's message boards. This has caused the girls and Kyle to think that Eric Cartman was responsible due to his history of misogyny, sociopathic tendencies, and bigoted behavior. However, the true culprit turns out to be no other than Kyle's dad "Gerald Broflovski", who proceeds to troll women and girls even more at the end of the episode.

In the second episode "Skank Hunt", he is revealed to have harassed Heidi Turner by crudely editing a picture of her mother for his amusement, which drove Heidi into deleting her Twitter account, making the staff and students of South Park Elementary feel like she has committed suicide. The boys decide to finally take action against Cartman by destroying his electronics, but they end up crossing the line since it turns out that Cartman is not SkankHunt42. Gerald, in the meantime, made it to Danish headlines with his online alias after trolling a Danish website for women with breast cancer. However, a Danish Olympian named Freja Ollegard and the women of Denmark refuse to be intimidated by SkankHunt42's antics, so Gerald takes it as a challenge. In retaliation of his trolling, believing that all of the boys are responsible, the girls of South Park Elementary permanently break up with each boy they're in a relationship with to take action against SkankHunt42, although they have no idea that none of the boys use that account.

In "The Damned", Gerald was happy to have gotten a reaction from both Freja Ollegard and Denmark after his continuous trolling. Unfortunately, when Gerald hears a news report on Denmark, he becomes panicked when he finds out that his trolling caused Freja to commit actual suicide by jumping from her apartment. While mourning her death, Lennart Bedrager vows to take decisive action against SkankHunt42 to force him out of hiding. Fearing the consequences of Freja's death after receiving a letter claiming that the original sender knows who he is, Gerald resorts to "Protocol Zero" by destroying all of his devices to clear evidence of his actions. He realizes that Ike's computer may still provide a clue and attempts to review it, but in doing so, Gerald receives a message from an anonymous user requesting to meet him under Freemont Bridge the next morning.

In "Douche and a Danish", Dick endeavors to help Gerald regain his confidence once more while requesting the help of every troll to sabotage Denmark's fundraising campaign to trace all trolls. Gerald finally regains his self-esteem to strike back as SkankHunt42 once more and began devising a massive troll raid against Denmark by pretending to be a Danish Lego company that has ties to ISIS, all with the help of his newfound group of trolls. The operation was a success, and SkankHunt42 finally got a reaction from everybody. In turn, this made Denmark hated by many, undermining their campaign and forcing the country to avoid social media temporarily. However, at the end of the episode, Cartman and Heidi vow to help Bedrager by sending him a message via VHS tape. Heidi gave the CEO the final piece of the puzzle needed to trace the troll and his associates; emoji analysis.

In "Fort Collins", Gerald starts getting tired of his trolling and continuously turned down Dick's attempts to establish a firm alliance, believing that there is more to SkankHunt42's reasoning for trolling than he realizes. After hearing the news that the citizens of Fort Collins got their entire internet histories exposed by TrollTrace.com, along with the death of one of his associates during the ensuing chaos, Gerald tries to warn Dick about the unfolding situation through FaceTime, but Dick ends the conversation by logging out after realizing how shallow Gerald is and the treatment Gerald gave him. At the end of the episode, Hillary Clinton is informed about TrollTrace.com, and the threat it represented to her presidential campaign. She is handed over a file containing SkankHunt42's real identity and his actions online.

In "Oh, Jeez", Gerald is taken by the US government to meet Hillary Clinton in private. She sends him on a top-secret mission to infiltrate TrollTrace's headquarters in Denmark by pretending to be a Turkish ambassador to set off an explosive contained within a briefcase that will destroy both the servers and the building. However, this turns out to be a setup planned by Lennart Bedrager, who requested the American government to hand over SkankHunt42 and his associates in return for not going ahead with TrollTrace, though Bedrager does not seem intent on holding up to his end of the bargain. As the timers on the briefcases counted down to zero, the explosives turn out to be a clip of Rick Astley performing "Never Gonna Give You Up", leaving the trolls baffled by how they just got countered by the Danes.

In "Members Only", Gerald warns Bedrager that people will be looking for him over his potentially lethal intentions. The CEO throws him an iPhone and tells him that he can contact anyone he likes, but only if he tells them where he and his associates are and why they are there. Instead of telling Sheila the truth and confronting the consequences, Gerald manipulates Ike to do the trolling for him, which leads to Ike getting grounded. Kyle finally finds out who the real culprit is after remembering Heidi mentioning that her emoji analysis suggests that one of the student's parents is the mastermind responsible for the unfolding gender war at South Park Elementary. Kyle runs off with Ike to expose their father's actions online.

In "Not Funny", Gerald tried once again to manipulate Ike until Kyle arrived and said angrily to his father that he knew it was him Skankhunt42. Gerald tries to lie miserably to Kyle but his does not work. When Kyle asks him why he did this, Gerald dares just say that he found it funny to make fun of women and girls, which makes Kyle even angrier. However, Gerald informs Kyle about TrollTrace and demands Kyle to do something about it. Gerald and the rest of the trolls are stripped naked by the Danes, but while the other trolls are confined in strapped chairs, Gerald is confined to the control room, where he is horrified to learn that Bedrager is an American troll posing as a Dane and that he intends to activate TrollTrace throughout the Internet to start a World War 3 just for fun, much to Gerald's distraught. Around the same time, Kyle and Ike jump up to the same conclusion after hearing about the bombings in Denmark, realizing that their father is in danger. Sensing that his plan is close to success, Bedrager betrays his fellow Danish workers by confining them with the trolls and locks Gerald in the control room (despite Gerald's objections).

In "The End of Serialization as We Know It", Gerald breaks out from the control room (with the help from the Danish workers and the trolls, who are now working together to stop Bedrager's plot). Around the same time, Kyle uses Gerald's account to make online derogatory comments to generate enough energy to prevent TrollTrace from accessing the Internet (with the help of President Garrison). Kyle also convinces Cartman to help him reroute a powerful energy source from SpaceX to stop the TrollTrace from going worldwide. Following the trolls and Danish workers' instructions, Gerald turns off many breakers to stop the servers, but as he is about to reach the last one, Bedrager arrives and holds Gerald at gunpoint. After some arguing over their actions, Gerald tricks Bedrager into letting his guard down by admitting that he's done making excuses for being a horrible person as he sees Bedrager as a far more worse troll than he could ever have been. Without hesitation, Gerald angrily kicks Bedrager in the crotch and throws him off the bridge, leaving Bedrager to fall to his death. Gerald then flips off the last breaker, allowing Kyle and President Garrison to reroute the Internet through SpaceX, thus saving the world from TrollTrace's attack. With the world now safe once again and the Internet rebooted, Gerald returns home, where he reunites with his family, though Kyle and Ike lose all respect for Gerald as they are still furious for his previous actions.

Before Season 20, Gerald seemed to be a primarily moral man who cares about the environment and current events in his town and the rest of the world. He is usually known to be a kind and friendly man who cares for his family's well being, although he can be rather stubborn, sarcastic, and/or just impolite at times.

As SkankHunt42, Gerald enjoys making both women and young girls on the internet furious and upset for fun by listening to hard rock music after consuming wine for each session. He initially had no qualms sexually harassing women that don't agree with these views as a form of retribution. However, he can easily enter a state of panic if his targets take their own lives, combined with an entire country like Denmark vowing to take serious action to bring trolls like him to justice. Part of the reason he started trolling was that he was caught in an argument with other Yelp reviewers and wanted them to shut up.

When reassured by Dick, Gerald is finally happy to be back into the game with his online alias with the help of his newly established gang of trolls, although he does not wish to troll to be political.

He is also shown to be rather cowardly since he does not want to face the repercussions of his actions. He would tell lies to his wife to keep his actions online a secret, and even pin the blame on someone else, like his youngest son when cornered in a dire situation.

He's shown to be strategic at harassing more than just one person. He starts by insulting a person than other people come to her defense. But somehow those people act so self-righteously that another will find them annoying and side with SkankHunt42, then the cycle continues.

Worst of all, Gerald constantly deluded himself into thinking he wasn't a troll, but a satirist and that he only insulted people to make other people laugh, but no-one thought he was funny.

Despite his awful behavior, Gerald admits that he finds Bedrager to be far worse than him and that Bedrager's plot to start a Third World War is quite appalling, even taking action to shut down the servers to stop TrollTrace from going online. 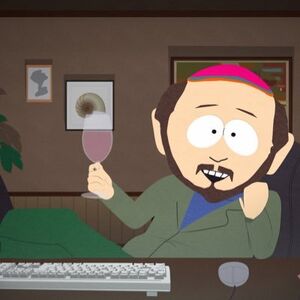 Retrieved from "https://villains.fandom.com/wiki/SkankHunt42?oldid=4383808"
Community content is available under CC-BY-SA unless otherwise noted.