Kill Kermit and his best friends for trying to kill her >(succeeded on Gonzo and Fozzie but failed on Kermit and Piggy).

Skeeter is the main antagonist of the Robot Chicken skit "Who Killed The Muppets?".

She is voiced by Breckin Meyer, who has also voiced Calvin, Jokey Smurf, and Munson in Robot Chicken.

While performing for the Muppet Show, Gonzo was about to perform his next stunt which would be to "walk across hot coals while explaining what the hell [he is]". But then a mysterious hooded figure appears to shoot Gonzo with a cannon saying "No, for your next feat, you die!" and shoots Gonzo's head off with a cannonball. Then Gonzo's headless corpse hands on the hot coals as the hooded person throws a pool float on the scene.

The next day, Kermit and his friends, alongside Steve Martin, present a funeral for Gonzo. During the funeral, Kermit, Miss Piggy, and Fozzie Bear were about to recall the last time a Muppet died before Gonzo, but then Steve Martin, who was saying the funeral prayers, interrupts their conversation scolding them for talking in front of his speech. Then Kermit reminds Piggy and Fozzie to never talk about some tragic past incident they've suffered, and then stare at Scooter suspiciously.

The next day, Fozzie Bear was practicing his comedy act. Then suddenly, the same hooded figure comes to him telling him a joke, "Why did the bear turn red?" Because he was em-bear-essed!" which Fozzie thought was a lame joke, clapping and saying "Waka waka!" sarcastically. Then the hooded person takes out a dagger stabbing Fozzie saying an alternative punchline to the joke, "Because I f***ing stabbed you!" Then a wounded Fozzie appears on the stage and faints and asks Statler and Waldorf for help, but they just ignore him and just laugh at his pain as the hooded person grabs Fozzie by the leg and pulls him back continuing stabbing him to death.

As Fozzie's corpse was being carried by two penguin Muppets, Kermit grows suspicious that he and his friends may be "paying the price for what [they've done]" in the past. Miss Piggy warns Kermit not to mention that moment, but an annoyed Kermit just teases her for "telling [him] what to do". Just then, Kermit suddenly sees Scooter again and tries to confess to him about his sister Skeeter's [tragic accident].

In a flashback of the Muppets as babies (spoofing Muppet Babies), Kermit plans that he and his friends should reenact The Little Mermaid, while Fozzie wants to question Kermit's sexuality. Scooter goes to get floats for the pool while Skeeter calls him a nerd. Then when Piggy wants to play the mermaid, Skeeter pushes her rudely saying that mermaids aren't fat, angering Piggy. Kermit tries to calm her down advising her to just walk away, but Skeeter instead punches Kermit. Fozzie tries to call for the nanny that Skeeter's bullying them again, while Kermit considers Fozzie the homo instead of himself, but Skeeter then starts beating up Fozzie for trying to tattle on her. Kermit saves Fozzie by knocking Skeeter unconscious with a wagon, causing her to collapse in the pool. Kermit then decides that Skeeter has to be put to rest for her actions, telling his friends to promise that it should be their secret forever, and then drowns Skeeter to death as he and his friends call for their nanny.

Back in the present, Scooter feels shocked that Kermit and his friends killed his sister Skeeter, but Kermit tries to justify their murder saying it was "60% self-defense", and tells Scooter that Skeeter "might be coming back from the grave for revenge". Scooter then says that Skeeter will have her revenge, taking of his glasses and hair changing them into a new pair of glasses and longer hair revealing to be Skeeter herself shocking Kermit and Miss Piggy. Then Skeeter starts to grab her knife attempting to murder Kermit and Piggy, with Kermit trying to run away and Piggy trying to fight back. Then Camilla the Chicken shows up with a bow and arrow to rescue Kermit and Piggy aiming at Skeeter saying in her chicken language "Get away from her you bitch!" (reference to Aliens). Skeeter then questions that she can't shoot her since "chickens don't even have fingers", but then Camilla successfully shoots an arrow at Skeeter's head killing her instantly. Then Steve Martin, wearing an arrow-to-the-head hat, shows up from behind saying "That bit never gets old!" 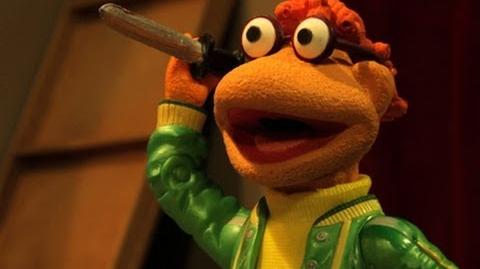 Robot Chicken Who's Killing the Muppets?