SkekAyuk is the Skeksis half of the UrSkek AyukAmaj, and serves as the Gourmand at the castle's court. He is one of the supporting antagonists in the 1982 fantasy film The Dark Crystal. His Mystic (UrRu) equivalent is UrAmaj the Cook.

In the film, he was performed by Louise Gold, with Thick Wilson providing his voice. In the 2019 Netflix prequel series, he is voiced by Harvey Fierstein, who also played Merv Green in Death to Smoochy.

Like all the Skeksis, SkekAyuk wears an dark gold and brown elaborate costume with a white-laced collar. A large handkerchief is tucked in SkekAyuk's sleeve to dab his mouth. Often seen stuffing food into his cheeks, SkekAyuk is the fattest of the Skeksis.

Pre-production notes for the film, as shown in "The Making of the Dark Crystal", describe the SkekAyuk as follows:

He is described in the film's novelization as "too slovenly and slothful" to care for anything else but food.

SkekAyuk commands a host of slaves to create complex meals for the Skeksis - including Roast Nebrie (a Skeksis favorite). Yet in spite of all this, the Skeksis' spiritual disjointment makes them leave each banquet still raging with hunger. In contrast, SkekAyuk's alter ego, the Mystic cook UrAmaj, prepares very simple and very satisfying meals by hand. 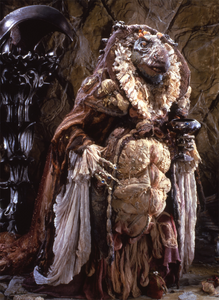 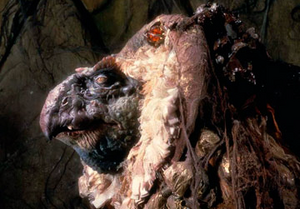