SkekNa is one of the supporting antagonists in The Dark Crystal. He is the Skeksis Slave Master, who oversees the work of enslaved Podlings at the castle. SkekNa's loyalty within the castle is to the brutish SkekUng. As with all the Skeksis, he has a noble counterpart living with the Mystics, his being the herbalist UrNol.

He was performed by Mike Quinn, with the late David Buck providing his voice.

SkekNa's clothes consist of a leather surcoat covered in metal clasps, chains, manacles and padlocks, and a shiny reptile skin robe. Distinguishing features of the Slave Master include an eyepatch covering his right eye and a left hooked artificial hand.

According to "The World of the Dark Crystal" and the film's novelization, SkekNa is described as being "purely and openly evil from the beginning" and having "no nobility at all".

Along with SkekTek the Scientist, SkekNa was part of a political faction loyal to SkekUng the Garthim Master, whom they both supported in his feud with SkekSil the Chamberlain. SkekSil himself held a low opinion of the Slave Master, considering him lacking in both nobility and imagination. When SkekUng ascended to the throne, he considered rewarding the Slave-Master's loyalty by appointing him to the newly created post of Patriarch, which would be a senior rank to that of both the Ritual-Master and the Chamberlain.

While SkekNa did not make an appearance in the first season of the prequel, he was mentioned by SkekZok on the idea of bringing the other Skeksis who were absent for help in battling against the Gelfling. The Slave Master is considered by the Ritual Master to be "useful in a fight" along with SkekSa the Mariner, another member of the Skeksis.

SkekNa, like the other Skeksis, made short appearances throughout the movie up to the climax. The Slave Master would then be combined with his Mystic counterpart into the UrSkek NaNol. 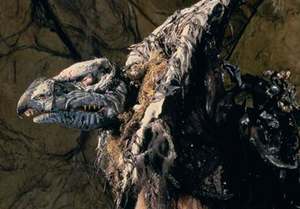 Retrieved from "https://villains.fandom.com/wiki/SkekNa?oldid=3776296"
Community content is available under CC-BY-SA unless otherwise noted.