Biting on coins to test if they are gold.

SkekShod is the Skeksis' court Treasurer and one of the supporting antagonists in The Dark Crystal. Within the Skeksi castle, SkekShod is administratively subordinate to the Chamberlain SkekSil, but his loyalty lies with a fellow intellectual, SkekZok. His Mystic counterpart is UrYod, the numerologist.

He was performed by Tim Rose, with Charles Collingwood providing his voice.

SkekShod wears a dark navy blue robe and a large collar with protruding silver gem ridges that is filled with white lace. He was commonly seen with a maroon kerchief head covering.

SkekShod is an uncommunicative and anomalous Skeksis, as he usually got his way of obtaining things only through bribery, making others slightly venal to him. He often spoke in a raspy but limited voice, in part due to being punished by SkekSo for questioning the latter's proclaimation as Emperor, therefore implying SkekShod to be loquacious when it comes to the laws before the event. Despite that, he was an eccentric individual who kept track of events through the gifts he received rather than through measuring time, showing his greed over the given treasures.

Like most of the other Skeksis, SkekShod only made short appearances throughout the movie onto the climax. He was seen with the others trying to get the crystal shard from the Gelfling Kira. After Jen placed it thrown to him from her into the crystal, healing it as the Great Conjunction, the Skeksis were later reformed with the Mystics into the UrSkeks. SkekShod was combined with his UrRu counterpart into ShodYod.

However, in The Power of the Dark Crystal, SkekShod was separated from his UrRu counterpart like his fellow Skeksis following the shattering of the Dark Crystal by the Fireling Thurma. He later join in the quarrel with the others against the Gelfling guards who try to fend them off, though the latter eventually succeeded and had all the Skeksis imprisoned. After being freed from his imprisonment by the Crystalline Eminence, SkekShod along with the others began to claim the Crystal back along with the offerings of the Gelfling. The Treasurer then found a Podling hidden among the treasure, having SkekNa drain it of its essence. In the end, SkekShod was once again merged with his counterpart after Thurma healed the Crystal. 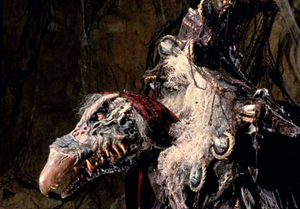 "You should be the emperor". ShekShod suggesting SkekZok to be the Skeksis' new ruler. 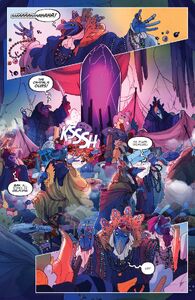 SkekShod covered in jewels while the other Skeksis went through the treasure. 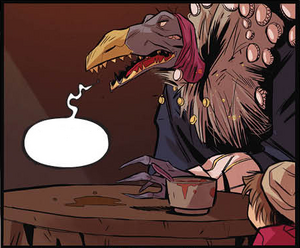 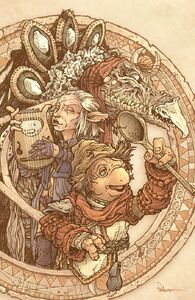 SkekShod in the cover for the 6th issue of the Age of Resistance comic adaptation.
Add a photo to this gallery

Retrieved from "https://villains.fandom.com/wiki/SkekShod?oldid=4346188"
Community content is available under CC-BY-SA unless otherwise noted.