Ambassador of the Skeksis (formerly)

General of the Skeksis

SkekVar is a major antagonist of the 2019 Netflix prequel series The Dark Crystal: Age of Resistance. He is the quick-tempered commander of the Skeksis' army and SkekSo's right-hand man.

He was performed by Kevin Clash, with Benedict Wong providing his voice.

When SkekVar was ambassador of the Skeksis, he assumed a facade of mock concern for the Gelfling, though his true nature revealed itself in private, where he would express enthusiasm over eventually crushing them.

As general, skekVar was the most impatient of the Skeksis, preferring violent action instead of scheming plots. Unlike his comrades, he made no effort to hide his disgust over the Gelflings, ignoring decorum even when in the presence of the All-Maudra and bragging in her presence that she owed her position to the Skeksis. SkekVar further distinguished himself in not being afraid of fighting in single combat, and dismissed his less powerful or martially skilled comrades as "weaklings". A shallow individual, skekVar always judged appearances, disliking Gelflings he deemed undersized or had faces he considered even remotely imperfect. When the healing properties of Gelfling essence were discovered, he advocated taking all Gelfling on Thra by force, thus putting him in conflict with SkekSil the Chamberlain, who preferred to harvest the Gelfling in moderation in order to guarantee a steady supply.

Out of all the Skeksis, SkekVar was the most loyal to Emperor SkekSo, though he was not above taking his own initiative when he felt it served the interest of all Skeksis, such as partially draining Gurjin, despite the Emperor wanting him alive and murdering the All-Maudra, something he was not instructed to do. Having an uncontrollable temper, SkekVar was quick to start a fight with those that insulted him. Only speaking calmly to skekSo, skekVar would bark out orders and threats to both Skeksis and Gelflings to remind them of his high rank.

SkekVar, along with the other Skeksis, attended the gathering to draw energy from the Dark Crystal in order to prolong his lifespan, although the process eventually failed. Despite being concerned, he readily agreed with SkekSo's speech about the Skeksis being eternal, and was later overjoyed when SkekTek the Scientist revealed the way to obtain energy is through the use of Gelfling essence drawn from them by the Crystal, soon quaffing down some essence drained from Mira.

The General later assisted in helping the Emperor with recruiting the Arathim to unleash an ambush in Stone-in-the-Wood, and capturing the Gelfling of the Castle Guard to drain them of their essence. SkekVar is also the only other Skeksis besides SkekSo to witness the effects of the Darkening, soon participating in the Battle at Stone-in-the-Wood with the other Skeksis. He clashed with Rian in a duel, nearly winning until SkekVar is wounded from the Dual Glaive, draining him of all the essence he consumed and reducing him to an extremely weakened state. The General retreated to a secluded area where SkekSil the Chamberlain eventually betrayed the former by stabbing him in his wound, killing SkekVar into the dust. With SkekVar dead, All-Maudra Mayrin is avenged and she can finally rest in peace. 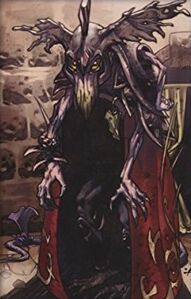 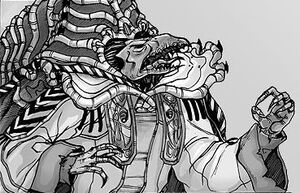 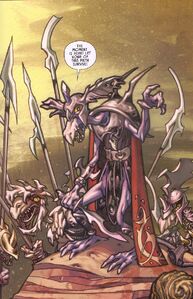 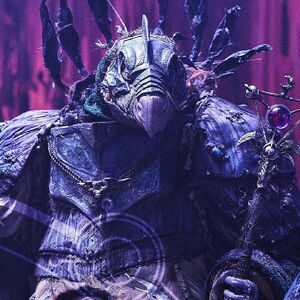 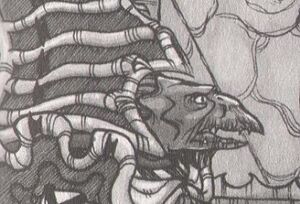 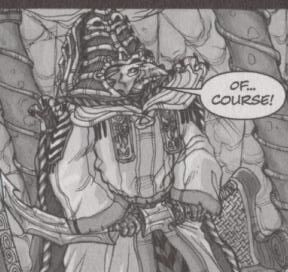 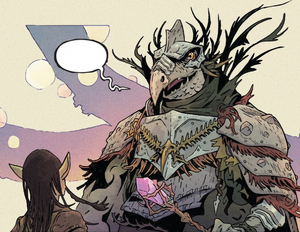 SkekVar in the Arathim Wars offering Ordon the position as captain of the Castle Guard. 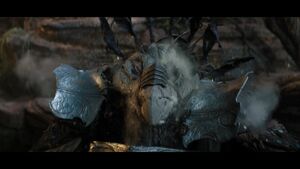 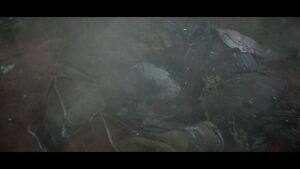 The remains of SkekVar.
Add a photo to this gallery

Retrieved from "https://villains.fandom.com/wiki/SkekVar?oldid=4085808"
Community content is available under CC-BY-SA unless otherwise noted.