After the Alchemist's transformation into the Skeleton King.

The Skeleton King (founder and master)

Serving the Skeleton King, bring forth supernatural curses upon all of Shuggazoom.

The Skeletal Circle is an underground cult of citizens of Shuggazoom City who worshiped the Skeleton King. They are the main villains of the titular episode "Secret Society" of the animated TV series Super Robot Monkey Team Hyperforce Go!.

This secret society of modern-day sorcerers who practiced black magic, plagued the planet Shuggazoom with their magic powers and sinister curses and continued to serve the Skeleton King, whom they also revered as the divine emissary of the ancient group of cosmic monsters known as the Dark Ones.

Ma and Pa Sheenko are the leaders of the Skeletal Circle and their daughter, Valina used to be a member of this cult.

Decades ago, the Skeleton King since he was brought into existence by the power of the Dark Ones, secretly formed this hidden and organized cult of men and women who have never seen or dreamed of things beyond their comphrension from within the sewers and hidden chambers beneath Shuggazoom City. They practiced black magic, conjure storms upon Shuggazoom and chanting in strange rituals that summons and brings all sorts of curses. They practrically than worshipped the Skeleton King and believed he was invincible. The group were forever to be known as the Skeletal Circle. Ma and Pa Sheenko were chosen to be the leaders of the Circle and the Skeleton King's "high priests". Their daughter Valina was once part of the Skeletal Circle when she was a child, but she has disappeared into obscurity and was never heard from. Regarless of that fact, the Skeletal Circle continued with their duties and recruiting more members, waiting the return of their master and his command to bring about a terrifying castatrophe upon all Shuggazoom and all its inhabitants.

The monkey team encountered strange activities and supernatural happenings in Shuggazoom caused by the Skeletal Circle. They battled the cult and stopped their insidous agenda. 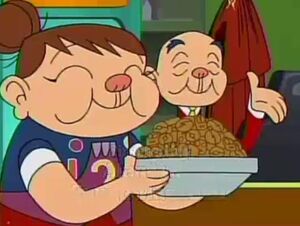 Ma and Pa Sheenko
Add a photo to this gallery

Retrieved from "https://villains.fandom.com/wiki/Skeletal_Circle?oldid=3013736"
Community content is available under CC-BY-SA unless otherwise noted.