Rising from the dead

The Skeleton is minor antagonist in the Bendy franchise. The Skeleton has only been featured in the cartoon "Tombstone Picnic".

The Skeleton appears as a white cartoonish skeleton with black eye sockets. His bones also rattle when he moves.

The Skeleton seems to be a mischievous and manipulative trickster who presumably frightens whoever comes to the graveyard from out of nowhere and teases them about being scared of him, just like how he did to Bendy.

While the Skeleton itself doesn't appear in Chapter 3, it does make a minor appearance in the trailer for Chapter 3. The Skeleton appears when he jumps out from the ground and grabs Bendy's ankle, flinging his picnic basket over to Boris. Bendy pulls himself free as the Skeleton pops out and frightens Bendy, before winks at Bendy and leaving.

As Bendy runs away from Boris he hides behind a gravestone and peeks out, the Skeleton also peeks out and startles Bendy as he runs away again. The Skeleton has not been seen since then.

The skeleton grabbing Bendy's ankle from the beginning of the cartoon.

Bendy meeting the skeleton for the first time before it goes back to its "grave". 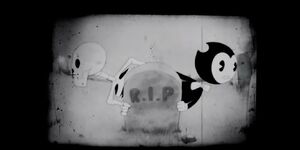 Bendy and the skeleton hiding behind from the gravestone together.

Ditto, animated. Used for the projection screen at the recording studio of Chapter 2.
Add a photo to this gallery

Retrieved from "https://villains.fandom.com/wiki/Skeleton_(Bendy_and_the_Ink_Machine)?oldid=3905716"
Community content is available under CC-BY-SA unless otherwise noted.