Extraterrestrial Criminals
The Skeleton Men are the main antagonists of The Scooby-Doo Show episode "A Creepy Tangle in the Bermuda Triangle" and supporting antagonists in Scooby-Doo 2: Monsters Unleashed. They were a persona adopted by Dr. Grimsley and his two henchmen to steal airplanes and sell them overseas.

The Skeleton Men resemblance to one-eye skeleton aliens, In the second live-action film, They have different color eyes; one red and the other green.

In "A Creepy Tangle in the Bermuda Triangle", The Three Skeleton Men were the disguises of Dr. Grimsley and his two henchmen. They were hijacking Weather Eye planes and trying to sell them overseas.

The Skeleton Men also appeared in the video game based on Monsters Unleashed. 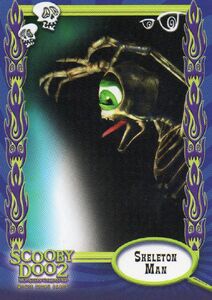 A Skeleton Man on the Scooby-Doo 2: Monsters Unleashed DVD. 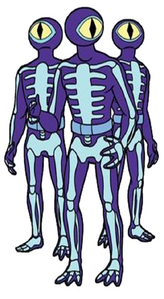