Kill whomever for The Purge (succeeded).

Skeletor is the secondary antagonist of the 2018 horror film The First Purge. He is a drug-addicted serial killer and one of the few active civilian participants in the Staten Island Experiment conducted by the New Founding Fathers of America, which would eventually become known as the Purge, thanks in part to Skeletor himself.

He was portrayed by Rotimi Paul.

Skeletor is a totally unhinged, sadistic criminal and is willing to kill whoever he wants just for his own pleasure or gain. He's also misanthropic, a fact made known from his first words in the film; he admits killing people is his only cathartic outlet aside from getting high, given his extreme hatred for humanity. His heavy use of narcotics contributes to his psychotic and violent nature, and his willingness to harm others and cause general havoc. He enjoys terrifying and messing with his victims, shown when he scares and attacks Isaiah. He's also likely a rapist, indicated by his sexual assault on Isaiah's sister Nya, likely planning to rape and murder her to satisfy his bloodlust.

Skeletor also seems unbothered by and perhaps even thrives on his own pain, hinted at by his many scars which may've been self-inflicted and him nonchalantly carrying a razor blade in his mouth

Skeletor is first seen being interviewed by an NFFA employee, who Skeletor tells he has a desire to murder others, to release his hatred. The employee tells him he'll soon get his chance, referring to the Staten Island Experiment, the predecessor to the Purge where all crime will be legal on Staten Island for 12 hours.

Skeletor later frightens a drug dealer Isaiah, working drug lord Dmitri's corner. Skeletor slashes Isaiah's neck with a razor blade and runs off as Kels fires a gun at him. Skeletor prepares for the Staten Island Experiment by fitting himself with several weapons and makes the first kill of the Staten Island experiment when he kills someone robbing an A.T.M, seen through the contact lenses he's wearing by the NFFA. Skeletor later approaches a block party in which he blends into the crowd and slaughters several people until he's finally noticed, causing everyone to panic and scatter. Isaiah, having planned to kill Skeletor, points a gun to his head, but Isaiah hesitates and Skeletor knocks the gun out of his hand as Isaiah runs away. When Nya goes looking for her brother Skeletor grabs her and begins to slit her throat, but Isaiah runs out and stabs Skeletor in the back, allowing him to escape with his sister.

Skeletor isn't seen again until The Smileys attack on the Park Hill Towers where he comes up behind the mercenaries and kills one before engaging the others only to be gunned down and killed by them and later his corpse is incinerated when Dimitri shoots a bomb to kill The Smileys. 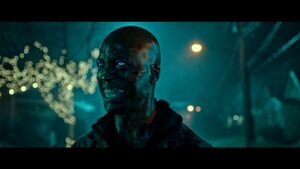 Skeletor after his killing spree at the block party 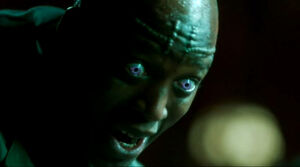