Skench is a Great Horned Owl who is a recurring antagonist in the Guardians of Ga'Hoole books The Capture, The Siege and The Burning.

Role in the books

She was the Ablah General St. Aegolius Academy for Orphan Owls (known as St. Aggie's for short). Not having much knowledge herself, Skench relies on moonblinked owls to make her feel smarter than she really is. Her lieutenants are Spoorn, Jatt and Jutt and was responsible for killing Grimble (who was falsely working for the academy) who helped Soren and Gylfie escape from the academy.

Skench along with Spoorn came to the Great Ga'Hoole Tree to seek refuge with the Guardians after the fall of St. Aggie's to which the Guardians accepted despite Soren's inner protest. Soren refused to teach the two how to fight with fire. During the invasion of St. Aggie's, the Guardians didn't trust Skench, which proved true when she turned against them. But during the attempt, Skench was killed by Soren who struck her with a burning branch and knocked her into a forest fire. 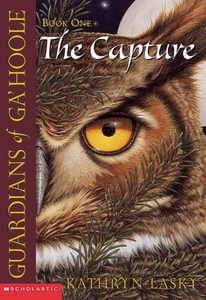 Skench on the cover of The Capture.