Have others be creative and imaginative in the way she wants them to be, which is ironically not creativity.

The Sketchbook is a cunning and manipulative "teacher" and the main antagonist in the first viral video of the popular YouTube series, "Don't Hug Me I'm Scared".

She is voiced by the co-creator of the webseries, Becky Sloan.

Sketchbook likes to be creative, ingenious, and imaginative, however, she wants anyone to be uncreative with her own ideas. For example, when Yellow Guy suggests painting a picture of a clown, she pours oil all over the painting and responds with "Whoa there, friend, you might need to slow down," followed by a pause before she changes the topic. Later, when Yellow Guy says that green is his favorite color, The Sketchbook replies that green is an uncreative color as she places a black "X" over the word.

Sketchbook looks like a normal notepad, however, with eyebrows, two bulgy eyes and a small mouth, plus two thin arms she uses to flip her own pages, normally for illustrating what she is talking about. Becky Sloan confirmed that albeit having a feminine voice and appearance, Sketchbook has an undefined gender, describing her gender as "paper"

Sketchbook springs to life at the start of the video and asks what the other characters' favorite ideas are. When she says her favorite idea is being creative, the other puppets disbelievingly asks her for more information. Through a song, she tries to convince the puppets to be creative by for instance imagining a silly face on an orange.

Afterwards she asks if looking at the clouds in the sky is interesting, to which the puppets respond with a clear "No", although they are entertained by the sight when the notepad puts a magnifying glass in front of her eye, making the clouds take shape.

She is impressed by the creativity of the puppets, but when the Yellow Puppet paints a picture of a clown, she tells him to slow down as she pours black paint all over his painting.

"Here's another good tip," she sings, and explains how arranging sticks and leaves to spell out your favorite colour (which are, on the wheel, red, yellow, blue, beige, and brown) is creative. The puppets do so, but she quickly lets Yellow Puppet know that his favorite color, green, is not a creative colour .

Just before she lets their creativity run wild, she tells them to listen to their heart, the rain, and the voices inside their brains. Then she gives them freedom to do what they want, but as they grow up they take the creativity too far, and darkness and death takes over as reality starts shifting, they eat a cake containing raw flesh. Red Guy decorates a raw human heart with glitter and Duck Puppet spells the word "Death" as they erratically start dancing, screaming in horror.

After the freakout there is a short silence, followed by Sketchbook concluding: "Now let's all agree to never be creative again," and then collapsing onto the table, presumably reverting back to an inanimate object.

She can be seen next to the bed, smiling.

She appeared in the Kickstarter trailer for Don't Hug Me I'm Scared, known as 'HELP'. She appears to be missing her eyes.

Sketchbook appears cross-eyed at the end of Don't Hug me I'm Scared 6. This is possibly damage done by Red Guy when he was trying to tamper with Roy's machine. Although, it's shown that she didn't appear in the time when Red Guy tampered the machine opening a possibility that she could be real.

Some of the disturbing imagery and the puppets'  behavior is said to be symbolic of how the media can corrupt young minds and brainwash people into being "creative" while in reality suppressing true creativity.

For example, at first, the puppets see nothing when they look at the clouds. But as soon as the Sketchbook puts a magnifying glass up to her own eye, they immediately began seeing things and chanting together as if brainwashed (despite their earlier lack of enthusiasm). This implies that Sketchbook is making them seeing things through her eyes instead of actually encouraging them to be creative.

Thought the video, Sketchbook is shown to be hypocritical towards Yellow Guy. This can be seen when Sketchbook continually disregards the creativity of Yellow Guy, first by destroying his painting of a clown ("Woah there friend, you may need to slow down!") and then when she decrees "Green is not a creative color" (basically saying that he can't choose his favorite color).

Before things turn dark, Sketchbook says to "listen to the voices in your brain" - which is rather sinister in itself, but the resulting madness may have been induced by Sketchbook herself as a final way of gaining control over the others.

This can be seen by the end when she says " now let's all agree to never be creative again" - basically telling everyone that thinking for oneself is a dangerous thing and free thought basically leads to dark anarchy and death.

Another symbolism is that the puppets represent children and that their minds are impressionable, and the Sketchbook represents the media, influencing children what to do or how to see the world.

In the middle of the video, after Sketchbook gives the puppets freedom, a trippy 3D effect is shown where the room spins round. After this happens, it seems the puppets have gained slightly different features. They all look taller, and Yellow Guy and Duck Puppet's heads are seemingly larger, with Yellow Guy's facial features looking different, although Red's features didn't change that much. This symbolizes them growing into adults, and because they were influenced by the Sketchbook (resembling media and society) into seeing the world through her eyes when they were younger, that seems to have a major impact on their actions. 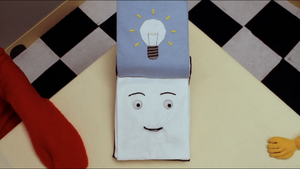 "Mine is being creative!"

A character often mistaken for Sketchbook, even tough the pattern is rather different. 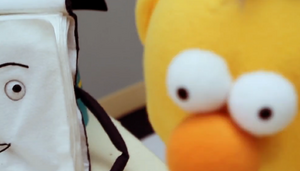 The Sketchbook, smiling at the insane puppets. 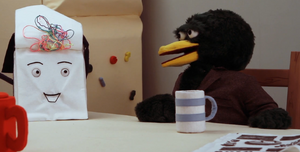 "I use my hair to express myself!"
Add a photo to this gallery

Retrieved from "https://villains.fandom.com/wiki/Sketchbook?oldid=3891901"
Community content is available under CC-BY-SA unless otherwise noted.