Groom Peter Parker (succeeded for a while).

Steven Westcott, also known as Skip, is a minor antagonist from Marvel Comics. Skip most notably appeared as a flashback antagonist in "Spider-Man and Power Pack #1", an early era Spider-Man comic, in was what is known as a "special issue" character and thus was designed to warn children about real-world dangers (in this case child molestation).

When Peter Parker was younger, he first met Skip during a visit to the public library. Peter's studiousness impressed Skip, nicknaming him "Einstein", and the two became fast friends, something encouraged by Aunt May, as she had been worried that her nephew spent too much time alone and didn't have many friends.

Peter and Skip would often spent time alone at the latter's house while his mother was away at work, and one night, Skip showed Peter a "Girlie" magazine and suggested that they "touch each other like the people in the magazine". Peter was terrified by this, but, according to him, was "too frightened to leave", implying that Skip had molested him in some way. Peter then stopped spending time with Skip and eventually worked up the courage to tell Aunt May and Uncle Ben of what had happened that day.

It's never stated what happened with Skip after this, but it's highly likely that Skip certainly ended up getting arrested for his crimes as Aunt May and Uncle Ben would have surely informed the authorities of the incident as they were extremely protective of Peter as well as of strong ethical backbone, although another possibility could be that Skip got severely grounded by his mother. Either way, it's made clear that Peter never saw Skip again afterwards.

Years later, Peter overheard his young neighbor Tony Lewis rejecting the advances of his babysitter Judy, who wanted him to strip himself from his clothes. After changing into his Spider-Man persona and scaring Judy away, learning of how she had been touching Tony in the wrong ways, Peter (without naming himself) told the young boy the story of how Skip had sexually abused him as a young child. Peter then swings Tony across town to his parents and returns to his apartment, satisfied in helping his neighbor and confronting one of his own personal demons.

Spider-Man later recalls these events again during a fight with the Hobgoblin. 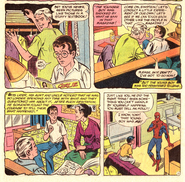