Robot
The Skovox Blitzer is the main antagonist of the Doctor Who episode The Caretaker. It is a robot which is one of the most deadliest machines in the cosmos and has enough power to destroy Earth.

It was portrayed by Jimmy Vee.

It first appears in an abandoned building where a policeman comes across it and is killed by it. The Twelfth Doctor goes undercover as a caretaker named "John Smith" at Coal Hill School where his companion Clara Oswald works in order to defeat by sending it through a Time Vortex to send in to the future where it can't harm anyone. He places devices around the school in order to lure it there once the school is empty. However, Clara's boyfriend and colleague Danny Pink removes some of the devices unaware of what they are thus affecting the Doctor's plan. The Doctor is successful in sending The Skovox Blitzer through the Time Vortex but due Danny removing some of the devices it wouldn't be permanently and the Doctor guess it will come back in around three days.

However, it instead returns the next day during the school's parents evening so The Doctor summons Clara and gives her his sonic screwdriver in order to lure the Skovox Blitzer to him. She succeeds and the Doctor uses a machine to make the robot think he is it's superior but he forgets the last command and the robot begins to go into self destruct but luckily Danny who was following Clara distracts it by jumping over it which makes it stop self destruct and the Doctor orders it to shut down. 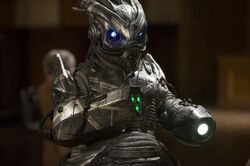 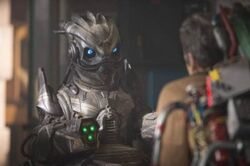 The Skovox Blitzer and the Twelfth Doctor.
Add a photo to this gallery

Retrieved from "https://villains.fandom.com/wiki/Skovox_Blitzer?oldid=3891906"
Community content is available under CC-BY-SA unless otherwise noted.