Cause nothing but destruction upon all (failed).

SkullGreymon is the evil alter-ego/version of Greymon. If Greymon is mistreated, he will Digivolve into SkullGreymon. He is also a minor antagonist In Digimon Fusion and Digimon Ghost Game.

SkullGreymon is an alternate Ultimate form of Greymon. The "skull" prefix in his name refers to his body, which is completely fleshless and entirely composed of bone. He has a missile that lies on his back that is shaped like a shark, as well as red eyes.

SkullGreymon is an extremely aggressive, destructive and uncontrollable Digimon whose violent temper causes him to have endless desire to fight.

Tai desperately wanted Agumon to Digivolve further when he gained his Crest of Courage, an object that would help Greymon obtain his ultimate digivolution level. One of the things he did was stuff Agumon with a lot of food as a Digimon needs to be well nourished when it digivolves. When the evil Etemon confined Tai and the other DigiDestined kids in a colosseum, he forced Tai's Greymon to battle a wild Greymon (who had an upper hand during the fight). After the kids escaped, Tai purposefully threw himself in front of the evil Greymon to make his partner Digivolve. This along with all that food, caused Greymon to Dark Digivolve into SkullGreymon, who easily defeated the evil Greymon. However, he suddenly went berserk, attacked Birdramon, Garurumon and Kabuterimon, beat them very easily, started wreaking havoc, then fled the colosseum. Exhausted, he reverted to Koromon. This also happens in the Digimon book entitled Mimi's Crest Of Sincerity.

This experience shows how the mental state of a DigiDestined can affect the way his/her partner will Digivolve. Each of the DigiDestined in Adventure were bestowed personality traits (in Tai's case, Courage) that they had to display to unlock their Digimon's Ultimate levels. Counter to his trait, Tai had been exhibiting feelings of fear and helplessness during Greymon's battle, which caused Greymon to Digivolve into the wrong Ultimate.

When the Digimon Emperor took control of Greymon with a Dark Ring, he tried to force Greymon to Digivolve into MetalGreymon, but instead, he Dark Digivolves into SkullGreymon once again. SkullGreymon defeated the new DigiDestined with just mere hits, however he managed to defeat one Meramon, some Airdramon, a big group of DarkTyrannomon and destroyed a Control Spire with his Dark Shot. The Emperor took him back to his base in an attempt to trigger the correct Digivolution several times until he managed to get Greymon to become an evil version of MetalGreymon by using a Dark Spiral (created of 3 Dark Rings joined together).

SkullGreymon is the main antagonist of episode 22, it appeared as Kiyoshiro, Ruli, Jellymon and Angoramon's nightmare after they were fallen asleep by Pillomon's nightmare bubbles. Although SkullGreymon was supposed to be defeated by TeslaJellymon, but was then revived as a new form, with its missile attached to its head. The main protagonists then wakes up Pillomon to end the nightmare.

A skeleton-based Digimon from which his entire body is nothing but bone. A SkullGreymon is formed when a Digimon spends too much important time fighting, eventually preferring to live only through his or her fighting instinct even after his or her death. SkullGreymon has no intellect at all but plenty of fighting instinct, and his entire existence alone poses a threat for other Digimon. His special attack is "Ground Zero", which launches an organic missile from his spinal cord. 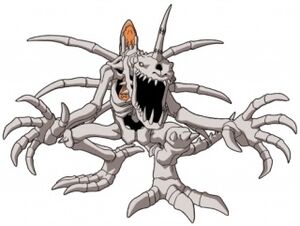 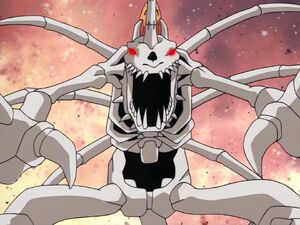 SkullGreymon is brainwashed with a Dark Ring. 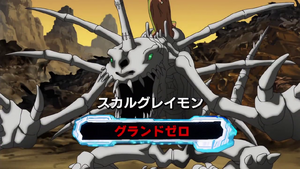 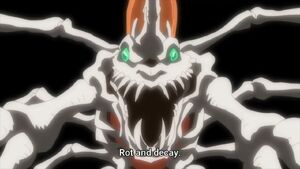 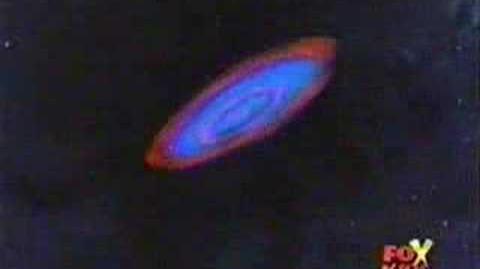