Energy blasts from the yellow orb on his staff

SkullSatamon is an Ultimate Class Digimon that looks like a skeleton with bat wings. He has a marking of a bat on his forehead probably meaning that he Digivolves from Devimon or IceDevimon. He also has a ribs that has a bat-like shape, and carries a staff with a yellow orb on the top, and a hook at the end.

Here, SkullSatamon is a new monster introduced to the Digimon World when Neo Saiba jogresses his Devimon and his Ogremon. Neo's strategy was to let the enemy tire themselves out battling his two monsters before bringing out a fresh SkullSatamon to catch them off guard. The strategy works against Etemonkey, but even fused the monsters are only able to battle Zeromaru to a draw.

Though he had to deal with MetalGreymon, MegaKabuterimon and Paildramon, he easily defeated them with his superior speed. Paildramon attempted to digivolve to Imperialdramon, but was attacked during digivolution, corrupting his data and leaving him paralyzed. The other DigiDestined and their Digimon arrived, but were unable to do any better, and soon de-digivolved. SkullSatamon then grabbed a nearby bus full of children, and hoisted it into the air, threatening to use it to destroy both the Digimon and the children. The rest of the digimon then transferred their energy to Imperialdramon, freeing him and allowing him to Mode Change to Fighter Mode. SkullSatamon mocked the new Digimon, only to be obliterated by it in a single blast with his Positron Laser Attack.

SkullSatamon is one of DarkKnightmon's minions. He attacks Xros Heart in the Dust Zone alongside DarkKnightmon and SkullGreymon, and is later absorbed by DarkKnightmon using the Darkness Loader. 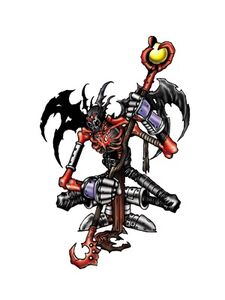 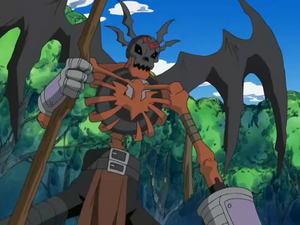 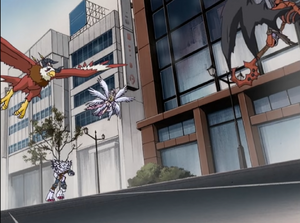 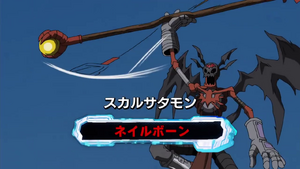