Skull (in Japanese: スカール, Sukāru), known in the Tokyopop English translation of the manga as Scar and in the English dub of the 2001 anime as Black Ghost, is the main antagonist of the Cyborg 009 franchise.

He is the tyrannical leader of the arms dealing organization Black Ghost. Skull and his organization seek to make a profit by either starting wars or escalating existing wars so they can sell their weaponry to both sides. His true identity is not known, but he is shown to be an incredibly powerful cyborg.

Skull played a direct role in the creation of the 00 cyborg line, ordering their kidnappings and overseeing their cybernetic conversion. His ultimate goal is to trigger another World War in order to increase sales of his weapons.

Encounters with the 00 Cyborgs

Skull oversaw the development of all nine of the 00 cyborgs. When Cyborg 009 woke up and tried to escape, Skull ordered the scientists to fill the room with tranquilizer gas.

Later, when the 00 cyborgs infiltrate the base where the Black Phantom was being developed, Skull contacted Commander Skarr and ordered him to activate the base's bombs. After Skarr set off the explosives, Skull killed him, having no more use for him. Skull then taunted 009 before disappearing.

Skull later held a conference with Black Ghost's executives and affiliates, where he presented to them the destructive capabilities of Cyborg 0013 as it devastated Tokyo. However, the 00 cyborgs interfered and were able to disable 0013's stealth shield. Skull ordered for 0013 to be immediately sent back underground. However, Cyborg 009 convinced 0013 to turn over a new leaf and 0013 sacrificed himself to escape Black Ghost's control.

Skull later contacted the three scientists who led 0013's development team via hologram, and executed them for not making a stronger robot. He then sent Dr. Beruku and Captain Zanburozu to recover the brain.

Later, Skull attempted to elevate the conflict in the West African nation Muamba to cause an all-out global war over Muamba's supply of the rare mineral Metal X He did so first by sending Cyborgman #1 to deliver the "Black Monster" supertank to the Muamban rebels. Skull then met with Unbaba, the dictator of Muamba, and convinced him to buy Black Ghost's weapons in order to combat the Rebels. Secretly, Skull intended to escalate the conflict in order to cause America to enter the war, which would lead other countries to follow and eventually turn it into a global conflict, one which he could profit off of. Skull's plan was ultimately foiled again by the 00 cyborgs, who aided the rebels in overthrowing Unbaba and put a quick stop to the war before it could grow bigger.

Skull then contacted Commander Farej, the Black Ghost official in charge of the incident in Muamba, and offered him a chance to redeem himself by eliminating the 00 cyborgs. However, Farej ended up unintentionally helping the cyborgs infiltrate Black Ghost's headquarters by bringing them there, thinking they were dead. As punishment for his failure, Skull incinerated Farej and burned him to death.

Skull later heard from two of his subordinates that the cyborgs had made it to the control room. Skull told them to deploy the Tesla. When one of them objected, saying that it was still experimental, Skull executed him. The Tesla incapacitated all of the cyborgs save 009. Skull and several of his soldiers then walk in and Skull proposed a one-on-one fight with 009, revealing himself to be a highly-advanced cyborg.

Despite trying his best, 009 is unable to defeat Skull, who easily overpowers him. Skull then taunts Dr. Gilmore, saying he is going to dismantle the cyborgs and melt them in his furnace. However, one of the charges the cyborgs planted explodes, distracting Skull and his men and allowing Gilmore to go over and turn the Tesla on Skull. 009 then activates his acceleration mode and knocks both him and Skull into an air duct leading to a vat of liquid nitrate. However, 001 uses his psychic powers to teleport 009 to a safe place, leaving Skull to fall into the vat. The charges planted by 005 in the vat then detonate, destroying both Skull and the Black Ghost headquarters. Or at least that's what they thought...

In truth, Skull had survived the explosion. He sent Van Vogt to take control of the Yomi Kingdom so they could use the Pu'Awak people to complete the Demon Statue, Black Ghost's ultimate superweapon. After Vogt captured Cyborgs 006, 007, 008 and Dr. Gilmore, Skull had him lead them to where the Demon Statue was being worked on. The four were shocked to see that Skull was still alive. Skull laughed and had them thrown in a dungeon. He then talked with Van Vogt about the Demon Statue.

When the Zattan attempted to reclaim the Yomi Kingdom, Skull activated the Demon Statue and used it to completely kill off the reptile-like creatures. After the death of Van Vogt, Skull gloated to the 00 Cyborgs about his plan before activating the bomb beneath them and taking off in the Demon Statue.

However, 001 teleported Gilmore and the 00 cyborgs out of there just in time. All of them landing in the ocean except for 009, whom 001 teleported inside the Demon Statue.

Skull faced off against 009 and easily overpowered the cyborg. Skull decided to show 009 the "true form" of Black Ghost, revealing Black Ghost's true leaders to be three brains. 009 then breaks free of Skull's grip. Skull attempts to damage 009 by spitting acid at him, but he misses. 009 then knocks Skull's head off, revealing him to be a brain piloting a robotic suit. Skull transforms his arms into talons and pins 009 up against a wall. Skull brags to 009 that he is the superior cyborg, but 009 tells Skull that he is nothing more than a "puppet controlled by a faceless evil force" before knocking Skull's arms off.

Skull charged and fired his ultimate attack at 009, but the attack was stopped by the Black Ghost brains. The three brains then executed Skull for almost destroying them. They attempt to kill 009, too, but he moves out of the way of their electricity blasts.

The brains then arm all of their weapons across the globe, setting the stage for another global war. Before anything can come of it though, 009 shoots the interior of the statue, causing it to begin to collapse. However, the brains state that the Black Ghost organization is universal and that they are just cells in a network of Black Ghost that will continue exist as long there's evil in men's heart.

Skull's identity was later taken up by the leader of Neo Black Ghost, a successor organization to the original Black Ghost seeking to follow in their footsteps. The Neo Black Ghost leader makes his debut in the "Golden Triangle" arc and later reappears in the "Aphrodite" arc.

Skull was split into two one-shot antagonists for the 1968 Cyborg 009 anime: Skull Mask and Ghost.

Skull appears as the secondary antagonist of the Cyborg 009 SF Roman light novel. He fills a similar role to what he did in the "Underground Empire of Yomi" arc in the manga.

Skull makes an appearance at the end of the 2007 anime adaption of Skull Man where his true identity is revealed to be the Skull Man, a suit created by Tatsuo Kagura's father and worshipped by an unnamed religious group. The suit grants its user powers at the expense of turning them into a ruthless killer.

At the end of the anime, the suit takes control of the second Skull Man, Hayato Mikogami, and remodels him into Skull. Skull then takes up leadership of Black Ghost (which appears here under the cover of a corporation called "Brain Gear"). The final sees shows Skull talking with an unseen entity (possibly the Generalissimo). It is unknown how canon this origin is to Cyborg 009 however.

Skull appears in the Cyborg 009 vs. Devilman OVA as a minor, but important antagonist.

He is seen in a flashback when Dr. Gilmore is talking about Dr. Adams and the High-Teen Number Cyborgs. He gives Dr. Adams the authorization to use his son Edward as the candidate for Cyborg 0014.

He later makes a cameo appearance at the end of the film, where he is seen standing in front of the Generalissimo.

Skull wears a black suit with a yellow rib-cage on the front, a black cape with a red interior and white boots and gloves. His defining feature however, is his skull-shaped helmet, hence where he gets his name from. Upon returning, Skull's appearance undergoes a few changes. He wears red boots and gloves instead of white ones; instead of a yellow rib-cage on his chest, he has a red slot where his brain can be seen, and his cape has a blue interior instead of a red one.

Skull is shown to be incredibly cold and manipulative, willing to escalate wars into global conflicts just to generate more sales for his weapons. He is also very affable and persuasive when need be, such as when he presented his weapons capabilities to Unbaba.

Skull is also an incredibly ruthless and sadistic individual, as he will not hesitate to terminate a subordinate who has failed him. Even if subordinate succeeds in his mission Skull will still kill the underling if he feels his purpose has been served, such as with Commander Skarr. He also seems to enjoy taunting his enemies, as he mocks Dr. Gilmore after incapacitating all of the 00 Cyborgs.

Skull's cybernetic augmentations grant him immense strength and endurance. He also has an Accelerator that allows him to run at supersonic speeds equal to, if not greater than, Cyborg 009. Other abilities Skull has include the ability to spit acid from his head and the ability to turn his arms into spikes. His most powerful attack, however, is his ability to summon a giant ball of electricity and fire it at an opponent. While its destructive capacity is never seen, it is implied to be very high, as the Generalissimo stopped the attack due to fearing it would cause damage to the Demon Statue. 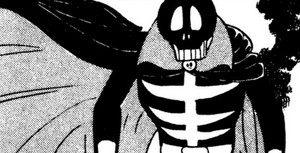 Skull in the manga.

Skull giving orders to his subordinates. 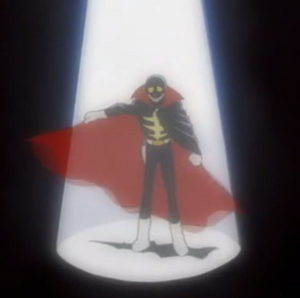 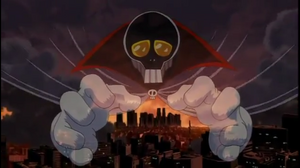 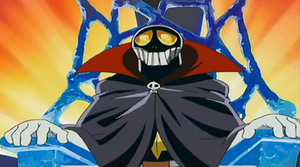 Skull seated on his throne.

Skull meeting with his council. 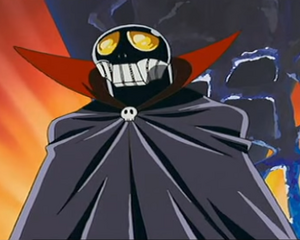 Skull standing up from his throne. 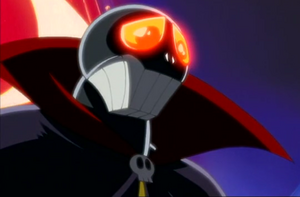 Skull giving a speech to his council. 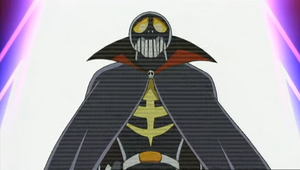 Skull with one of his lieutenants. 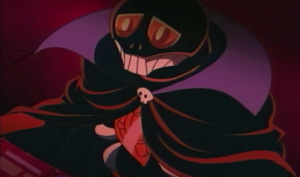 Skull without his head. 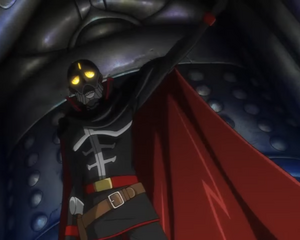 Skull's cameo at the end of Cyborg 009 vs. Devilman. 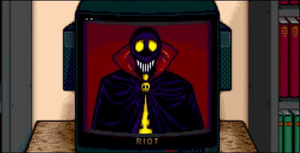 Skull in the 1993 Mega-CD game.
Add a photo to this gallery

Retrieved from "https://villains.fandom.com/wiki/Skull_(Cyborg_009)?oldid=3797309"
Community content is available under CC-BY-SA unless otherwise noted.