He is a mischievous imp who steals Majora's Mask, which possesses him and uses his body to wreak havoc on the world of Termina.

Skull Kid's chronological first appearance is in The Legend of Zelda: Ocarina of Time. Link can find him in the Lost Woods directly left of the entrance room, playing a flute. If Link plays Saria's Song on a nearby stump, Skull Kid will give him a Piece of Heart. Link can also sell Skull Kid the Skull Mask, but he will only pay half of what it is worth. If Link encounters Skull Kid as an adult, Skull Kid shoots Link with needles from his flute, dropping an Orange Rupee if defeated.

A Skull Kid also appears in The Legend of Zelda: Twilight Princess as a guardian of the Lost Woods. It is unknown if this Skull Kid is the same one from Majora's Mask, but they both serve an adversarial role towards the game's protagonist Link. When Link comes to remove Zant's curse by finding the Master Sword, the Skull Kid tests him by sending wave after wave of Puppets after him until Link attacks him directly several times. Link has to fight him and his puppets one more time to reach the Temple of Time.

Skull Kid appears as two stickers. The first, based on Ocarina of Time, gives a small boost to Ganondorf's darkness attacks. The second, based on Majora's Mask, boosts damage from leg attacks for all characters.

Skull Kid, along with Majora, appears in Super Smash Bros. 4, as an Assist Trophy. When Skull Kid/Majora is summoned, they flip the screen upside down, or make the controls reversed for a few seconds. He also appears in both versions as a regular trophy.

Skull Kid returns once more as an Assist Trophy in Super Smash Bros. Ultimate, acting exactly the same like he did in the last game. He is one of the few Assist Trophies that cannot be KO'ed. He also appears as an advanced primary grab-type spirit, whose spirit battle is against a Mii Brawler wearing his clothing and Majora's Mask, with two Meta Knights accompanying him, representing Tatl and Tael, on the Garden of Hope stage. Skull Kid as an Assist Trophy can show up to cover the arena with fog. At level 99, he can be enhanced to the Legendary "Skull Kid & Majora's Mask" spirit, which grants the fighter the ability to steal some of their opponents' health whenever they strike an enemy. 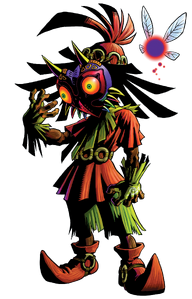 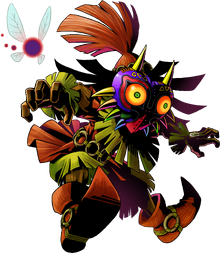 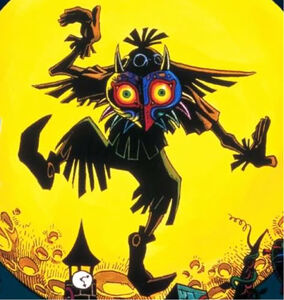 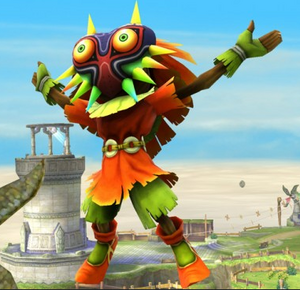 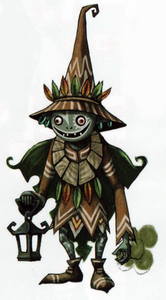 Concept art of Skull Kid in The Legend of Zelda: Twilight Princess.