Skull Knight Known as Skull Bishop in Japan is a minor villain in Yu-Gi-Oh! GX. He is 1 of the 5 main servants to the Supreme King.

He was voiced by Yūto Kazama in the Japanese version, and by Wayne Grayson in the English version.

Skull Knight is a green humanoid with a skull for chest armor and helmet.

At the time the Supreme King was ruling the Duel monsters spirit world some monsters were trying to rebel. One of them was led by the Ancient Brain. When Axel Brodie found out that the Ancient Brain was really a traitor and was actually Skull Knight, the 2 dueled each other. It seemed Axel would lose cause Skull Knight summoned his most powerful monster; Lycanthrope and was using it effect. However Axel won the duel. Skull Knight's last words were that Axel would fall fighting the Supreme King which he did.

Skull Knight's Deck is called the Lycanthrope Deck. His strongest card is Lycanthrope cause of its effect. 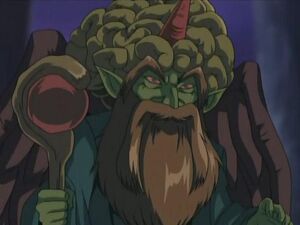