He was portrayed by David W. Thompson, while Noah Garrett portrayed him in the disguise.

Not much is known about his life before he became one of the killers other than that he recently graduated from High School and was an employee at Shadyside Mall who worked an unknown position. Once Lucifer posessed him, he became a cold blooded murderer who killed anyone in his path (or anyone Satan wanted him to kill).

Ryan was first seen pranking Heather, another employee, with an inflatable doll, much to Heather's shock. After a brief conversation with Heather is presumably when he gets posessed, as a fly is seen on him after he looks back at Heather. He presumably murders people around the mall after this. He then toys with Heather by luring her to her doom, which is unsuccessful. He then catches Heather by surprise and slits her stomach open, which drastically weakens her. Finally, he stabs Heather in the back, until he is shot by Sheriff Nick Goode, who was unfortunately too late to save Heather. He is also one of the Killers that goes after Samantha Fraser and her blood. First going to the house where Kate is Babysitting to look for a shirt with Sam's blood on it, then going to Deena and Josh's house to find a shoe with Sam's blood. Skull Mask would later follow Sam at the hospital she was in and claim three victims. He then the crew into the high school, where he is caught in an explosion that was meant to kill him, Ruby Lane, and the Camp Nightwing Killer, which was unsuccessful at killing him. He is finally seen at the Grocery Store, where he has a struggle with Kate, before killing her using a bread slicer. Then, after Sam temporarily dies, he disappears after he is about to kill Josh.

Ryan returns in this episode, being one of the killers that was lured to Shadyside Mall to kill Nick Goode. He, along with a few others, try to kill Goode after Deena's blood is poured on him, after this is unsuccessful, he has some of Deena's blood poured on him, which happens with all the other killers present, leading to him and all the others killing each other, after Goode's death, he poofs into dust, and is not seen again from this point onwards.

List of known victims of Skull Mask. This list only applies for the on-screen deaths or victims whose body was discovered on-screen. Skull Mask has aproximately 11 confirmed victims. 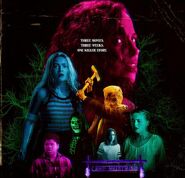 Skull Mask attempting to kill Josh. Also his final scene in the film.

Skull Mask is trapped by Ziggy.

Skull Mask and the other killers destroyed after the frenzy.