Skurge the Executioner is an Asgardian supervillain who is an enemy of Thor and the right-hand ally and bodyguard of Amora the Enchantress. The Executioner carried a huge magical battle-axe that can slice through anything, and project fire and ice. He was seduced by Amora to follow her, as he thought she would give him love and power, but she always puts herself just out of reach in order to have him continue to follow her.

He, along with Enchantress, was a part of the original Masters of Evil under Baron Zemo.

Eventually tiring of Amora's toying with him, Skurge reformed and joined Thor, Balder, and the other Asgardian warriors in a battle against Hela and her evil forces. He was however, killed in a heroic sacrifice, and Amora grieved his loss.

Skurge appears as a supporting antagonist in Thor: Ragnarok, portrayed by Karl Urban. In this iteration, he is an Asgardian warrior turned Hela's right-hand and executioner. Skurge the Executioner in The Avengers: Earth's Mightiest Heroes 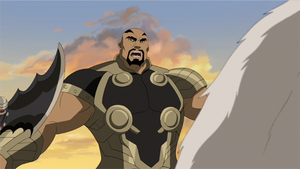 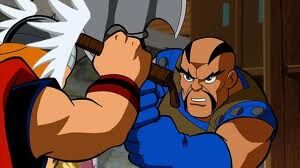 Skurge in The Super Hero Squad 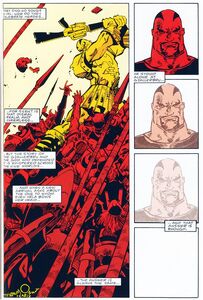 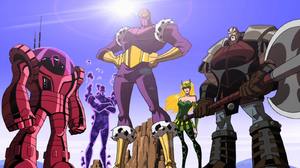 Retrieved from "https://villains.fandom.com/wiki/Skurge_(Marvel)?oldid=3895589"
Community content is available under CC-BY-SA unless otherwise noted.