NOTE: This article is about the incarnation of the Skurge from the Marvel Cinematic film series. The mainstream version can be found here: Skurge (Marvel).

Wooing women.
Abusing his control over the Bifrost Bridge in order to collect things.

Aid Hela in her goals (abandoned).

Skurge is a major antagonist in the 2017 Marvel film Thor: Ragnarok. He is a downtrodden Asgardian warrior who briefly served as the executioner of Hela, the Asgardian Goddess of Death.

He was portrayed by Karl Urban who also played Kirill, Black Hat, and Billy Butcher.

Skurge started out as a warrior fighting alongside Thor against the Maurauders during the Maurauders' War. Following Odin's disappearance, Loki Laufeyson (posing himself as Odin) appointed Skurge as the new sentry of the Bifrost Bridge after banishing Hemidall (the former sentry), and Skurge took advantage of this to woo women and travel to locations to collect items, such as a pair of M-10 guns from Earth.

When Loki's deception is revealed by Thor, Skurge is demoted to becoming the new janitor of the Bifrost Bridge under Volstagg and Fandrall's supervision, due to his alliance with Loki. However, things for Asgard went worse when Hela returns to Asgard following Odin's death. After dispatching both Thor and Loki, Hela killed Volstagg and Fandrall before recruiting Skurge to serve her as her new right-hand and executioner.

Skurge became involved of Hela's next plan to use the Bifrost Bridge in conquering the Nine Realms, but they soon learned that Hemidrall stole the sword controlling the bridge before escaping with the surviving Asgardians to form a resistance against Hela's reign. Determined to retrieve the sword, Hela brings life to an army of undead soldiers (known as Berserkers) and a giant wolf named Fenris Wolf, and she had Skurge to lead the Berserkes to track down the resistance and steal the sword. However, Skurge becomes disillusioned over his new role as Hela's executioner, feeling that it goes against the true Asgardian ways.

Following Thor and Loki's return to Asgard after defeating the Grandmaster and his forces in the planet Sakaar, Skurge initially leads the Berserkers in attacking the resistance, but has a change of heart after seeing Loki bringing in one of the Grandmaster's giant ships to evacuate the Asgardians. Deciding now that serving Hela isn't worth it, Skurge decides to abandon Hela and help the Asgardians to safety. As Thor fights against Hela, he gets Loki to awaken the fire demon Surtur to bring about Ragnarok to kill Hela and the remaining Berserkers.

Upon witnessing Surtur's arrival and the Asgardians trying to escape, Hela tries to stop them, but Skurge sacrifices himself by killing dozens of Bezerkers with his guns before allowing himself to be killed by Hela in order for the Asgardians to escape. Boarding away in the ship, the Asgardians can watch as Surtur destroys all of Asgard, killing himself as well as Hela and the Berserkers in the process.

Skurge's sacrifice proved to be crucial for his kin's survival as they were able to flee Asgard due to Skurge's distraction and it appears that the Asgardians (even Thor, Loki and Hemidall) finally saw him as a hero for his sacrifice. Unfortunately, Skurge's sacrifice became in vain as the arriving alien warlord Thanos and the Black Order managed to kill half of the Asgardian survivors (including Loki and Hemidall) to steal the Tesseract, leaving a helpless Thor to drift in space while Hulk is sent back to Earth to warn of Thanos' arrival.

Skurge being enlisted by Hela.

Skurge standing by Hela's side as she sets out to invade Asgard.

Skurge being subtly horrified in silence to see Hela relishing in a malevolent victory after slaughtering the entire Asgardian Einherjar army in a single combat.

Skurge leads the army of Beserkers against Heimdall and the Asgardian resistance after demanding him to give up the sword to the Bifrost Bridge.

Skurge brandishing a pair of M-10 guns as he chose to redeem himself and save Asgard by engaging the remaining Berserkers that attempted to board the ship.

Skurge making his final stand for Asgard as he fights against the remaining Beserkers before being killed by Hela for his betrayal.

Skurge being stabbed to death by Hela upon throwing the Necrosword within his heart. 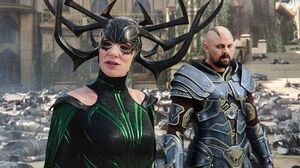