King of the skies

Sky King (in Japanese: 天空王, Tenkūō) is a minor antagonist in the anime/manga series One Punch Man. He is a Mysterious Being who roamed and ruled the skies and wanted to take the Earth for himself.

He was voiced by Youji Ueda in the Japanese version, and Chris Smith in the English version.

Sky King was a cruel tyrant due to that he believed that he could destroy the Hero Association with ease or at least with his group of Skyfolk warriors. Sky King was also shown to be power-hungry as he coveted to conquer the Earth's surface. Despite his evil nature, Sky King values his underlings and believes they would help him achieve world domination due to their strength and devotion to him.

A meeting is held at the Hero Association Headquarters regarding Shibabawa's death (she died from choking on cough drops). The Minister Officer of Justice for the organization, Sitch, mentions that Shibabawa's predictions have always been 100% accurate, be it monster attacks or natural disasters. She left a note, alarming the heroes. Superalloy Darkshine then explains the reason this meeting is taking place is because they now need a new plan of action to prepare for any threats (Mysterious Beings, natural disasters, etc.) without Shibabawa's assistance.

To make matters worse, before Shibabawa died, she left a note stating that the Earth is in grave danger. Sitch also mentions that this inevitable threat is above Dragon level and it will take place within half a year. Suddenly, the headquarters is under attack by Sky King and his Skyfolk.

Shortly after this, with both the Sea King and Subterranean King dead, Sky King then decides  to take over the world himself with his four underlings: Hawk, Kite, Eagle, and Falcon. However, all of them are killed by an unseen enemy (Melzalgald). Before he could do anything, he perished at the hands of Melzalgald who treated him like a 'small bug'. 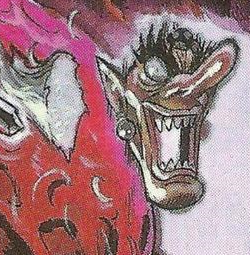 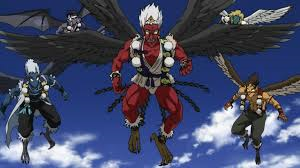 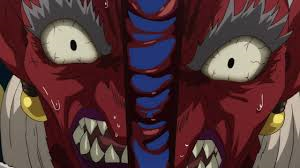 Sky King's Death
Add a photo to this gallery 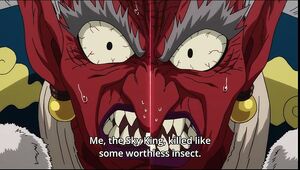 Retrieved from "https://villains.fandom.com/wiki/Sky_King?oldid=3891912"
Community content is available under CC-BY-SA unless otherwise noted.