Skye, also known by her title The Twilight Assassin, is a playable antagonist possibly working for the Magistrate in Paladins. She is a Flank champion that was introduced on November 17th 2015.

She is voiced by Holly Franklin.

"Noble by birth, Skye abandoned a life of luxury and wealth to pursue her dreams of excitement and adventure. During her time spent on the streets interacting with the criminal underworld of the Realm, she discovered her natural talent and boundless obsession with killing.

When her career as a contract assassin brought her fame and fortune, she caught the Magistrate's attention, and now serves as one of Grand Magister Karne's closest advisors. To her, the War of the Realm is just a long-term contract, one that won't end until the last of the Resistance is dealt with."

Abandoning her noble family, Skye left in search of excitement and adventurer, soon discovering her obsession with killing, leading to her joining the criminal organization, the Thousand Hands, where she was trained, and later defended Zhin when Koga returned for revenge.

However, her assassinations did not go unnoticed, and eventually attracted the attention of the Magistrate, leading to her leaving the Thousand Hands and becoming Grand Magister Karne's closest advisor. Though whether or not she still remains in this position or with Magistrate in general, is unknown.

Skye is incredibly egotistical and sadistic, constantly praising herself in regards to her own skills and figure, while also mocking most other characters, insulting the males while degrading the females, even going so far as to insult other versions of herself.

However, Skye is willing to cooperate with others at times, such as training in the Thousand Hands and even defending Zhin from Koga's revenge, to working with the Magistrate as Grand Magister Karne's closest advisor. Despite this, Skye is loyal to no one but herself, likely seeing everyone as nothing more than tools for her to abuse for her own gain.

With her natural talent and obsession for killing further trained by the skilled assassin's of the Thousand Hands, Skye became a contract assassin worth being feared, gaining such a reputation to catch the reputation of the ruling government, the Magistrate. With special poison darts and various forms of invisibility on top of her training, Skye's a naturally born killer to be feared.

As with every other champion in Paladins, Skye has a number of different talents and cards which can significantly alter her playstyle. Cards can be upgraded with a limited pool of fifteen points per load-out in order to increase their effectiveness. Numbers in curly brackets are the default values and can be upgraded a total of five times, each upgrade adding another instance of the base value to overall effectiveness. 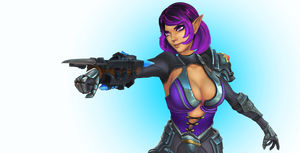 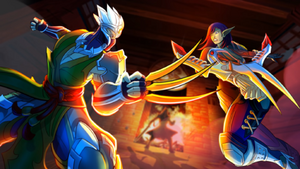