Causing misery and chaos around him.
Insulting people.

Possess and turn people into dummies for fun and turn his owners into his slaves (failed usually but sometimes he succeeds).

In the TV series, he was portrayed by Annick Obonsawin in three episodes, and Cal Dodd in two others.

As described in the books, Slappy has wavy brown hair painted atop his wooden head and freckles dotted along his cheeks. His lips are painted bright red and curl up into a sinister smile. The lower lip however, sports a chip in the corner, giving Slappy's grin an unsettling crooked appearance. His eyes are described as being a cold blue and almost lifelike in appearance. Slappy wears a dark grey, double-breasted suit, with brown leather shoes and a red bow-tie. His shirt is nothing more than a white paint application on the chest, with a collar stapled on the neck.

Slappy was originally created by an unnamed evil sorcerer by being carved out of the cursed wood of a stolen coffin, alongside Mr. Wood. He takes the form of a ventriloquist dummy but is granted life, threatening everyone around him and becoming more of a threat as the series progressed. The only way to make him live is by saying the following incantation "Karru Marri Odonna Loma Molunnu Karrano" (said to mean "You and I are one now"). Written down on a business card, he keeps the spell in his pocket. Almost every new owner reads out the spell, causing the electricity to act strange for a few seconds.

Night Of The Living Dummy

Slappy would soon be found in the dumpster by Lindy Powell, and later becomes her imaginary friend and ventriloquist dummy. Lindy's sister, Kris, becomes extremely jealous of the attention Lindy is getting at school and from her mom. Soon, Kris gets her own dummy, Mr. Wood. Lindy reads some magic words on a piece of paper found in Mr. Wood's pocket. They read, "KARRU MARRI ODONNA LOMA MOLONU KARRANO." This brings Mr. Wood to life and he causes all sorts of mischief. Soon, Mr. Wood is crushed by a steam roller. Following Mr. Woods death, Slappy becomes alive. Kris and Lindy run inside their house, and find Slappy standing up on his own two feet. Slappy then asks if the other dummy is gone.

Night Of The Living Dummy II

Book: Slappy has a new home and it's with the Kramer family. Mr. Kramer gives Slappy to Amy as a gift and as a replacement of Amy's older dummy, Dennis. Amy then finds a paper in Slappy's pocket that reads, "KARRU MARRI ODONNA LOMA MOLONU KARRANO." This brings Slappy to life and he causes lots of trouble for Amy. Slappy insults Amy's parents, ruins Sara's room, holds a little girls hand tightly and doesn't let go, and beats up Amy if she disobeys him. Sara and Jed find out that Slappy is the one doing all those bad things and decide to pitch in and help Amy defeat Slappy. Later, Slappy is subdued by Amy's previous dummy, Dennis. He splits Slappy's head in two.

TV: Slappy gets found once more and sent to a new home. He goes into the custody of Amy Kramer, for a new ventriloquist act. He begins causing chaos and havoc in the household, wrecking Amy's dad's guitar, vandalizing her sister's painting, and even attacking a child. All of this gets blamed on Amy, and soon Slappy has taken hold of her entire life. Fortunately, another living dummy named Dennis, subdues him by splitting his head open.

Night Of The Living Dummy III

Book: Trina O'Dell and Dan O'Dell's father, Danny O'Dell finds Slappy in a dumpster and brings him home. He repairs Slappy's head and gives him the name, Smiley. Trina reads a paper found in Slappy's pocket that says, "KARRU MARRI ODONNA LOMA MOLONU KARRANO." This brings Slappy to life. Slappy then starts making messes around the house with Rocky at the scene of the crime. Dan and Trina want to bust whoever is doing it and are surprised to see Slappy causing the mischief. He says they are his slaves, but Trina and Dan won't take it. They dump Slappy in a well, but he returns the next day. Trina and Dan read the magic words that brought Slappy to life, thinking they could put him to sleep as well. This fails, but all the other dummies come to life and start ganging up on Slappy. Slappy is then defeated, but Zane rats out Trina and Dan for being in the attic when they're not supposed to. Zane leaves to go home the next day, and Danny O'Dell tells Trina to bring Zane a dummy to take home with him. Trina gives Zane Slappy as revenge for snitching on her and Dan. Slappy is then carried off to the car with Zane. Slappy winks at Trina and Dan.

TV: Slappy gets bought by a dummy collector, and gets his head fixed, bringing him back to life. He begins putting his evil soul into other dummies, causing havoc in the household. This is, once again, blamed on the children of the house. But this time, Slappy attempts to turn the family into dummies too. He gets stopped, however, when lightning hits him in the head, blowing him up and killing him.

Slappy keeps himself quiet, as the new owner finds out strange things are happening in the house. Furniture get moved, things disappear and re-appear. His behavior is akin to those of a very naughty child and a poltergeist. He also has the ability to change people into ventriloquist dolls with his green breath, in addition to animating other dolls and puppets. In Slappy's Nightmare, The Streets of Panic Park, The Dummy meets the Mummy and Diary of a Dummy he serves as an anti-hero. He also appears in the Horrorland series and Goosebumps: Most Wanted.

He also has his own series called Slappyworld where is the narrator of the series and sometimes the main villain of some books. Slappy also would serve as the lesser of two evils or an anti-hero more frequently in these books such as in The Dummy Meets the Mummy or Dairy of a Dummy.

In the TV show Slappy is more villainous than in the books. For example in Night of the Living Dummy 2 in the book his worst act is simply painting Amy's name in Sarah's room and squeezing a girl's hand painfully (though he doesn't break it). In the TV episode he attempts to slam a guitar on Amy's dad (though it's implied he knew Amy would stop him and break the guitar and wasn't going to hit her dad).

In the Night of the Living Dummy 3 episode, he mistreats Rocky and turns Zane into a dummy. In Bride of the Living Dummy book, he threatens to hurt but not kill the kids at the birthday party, doesn't kill anyone except Mary-Ellen (which is done in self-defense) and desires to make Jillian, who is is sixteen, his "bride". In the TV episode, he is stated by Jimmy to have killed his rivals (although they were other dummies, not humans) and intends to make Jillain's younger sister Katie, who is around the age of a twelve-year-old, his "bride". 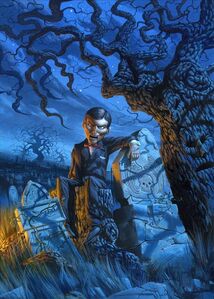 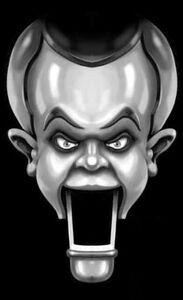 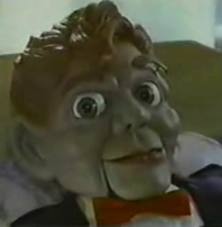 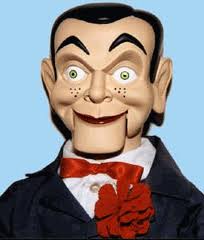 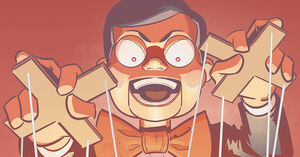 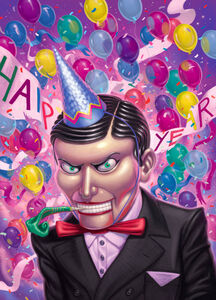 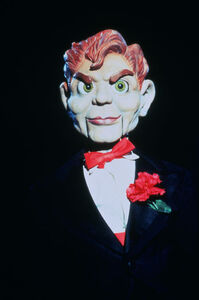 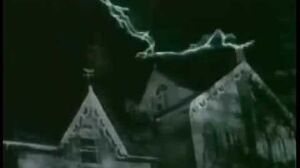 Goosebumps - The Death of Slappy the Dummy