Slappy, the Dummy That Is No Dummy, Ol' Crazy Eyes, The Bad Boy, Smiley

Collecting souls, some magical abilities, and he is considerably stronger than he looks.

Collecting souls, causing misery and chaos around him

Possess and turn people into dummies for fun, turn his owners into his slaves (all failed)


Slappy the Dummy is a recurring antagonist in the children's horror-book series Goosebumps as well as the associated media that followed. He is considered one of the most popular and most evil creatures in the series, as well as being the key factor to the success of one of the series' most popular story arcs: The Night of the Living Dummy Anthology.

Slappy was originally created by an evil sorcerer; alongside Mr. Wood, Slappy was carved by the sorcerer out of the cursed wood of a stolen coffin. After Mr. Wood was destroyed at the end of Night of the Living Dummy, this resulted in Slappy becoming twice as evil and much, much ruder.

Slappy takes the form of a ventriloquist dummy but is granted life and becomes evil, threatening everyone around him and becoming more of a threat as the series progressed. The only way to make him live is by saying the following incantation: "Karru Marri Odonna Loma Molunnu Karrano" (said to mean "You and I are one now"). Written down on a business card, he keeps the spell in his pocket. Almost every new owner reads out the spell, causing the electricity to act strange for a few seconds.

Slappy keeps himself quiet, as the new owner finds out strange things are happening in the house. Furniture gets moved, things disappear and re-appear. He has a behavior of a very naughty child, or a Poltergeist. He also has the ability to change people into ventriloquist dolls with his green breath. With this breath, he also can animate other dolls and puppets. He is blown into pieces in the Goosebumps television series, in Episode 3: "Night Of The Living Dummy".

He will be the main villain in the Goosebumps movie set for release in October 16, 2015. 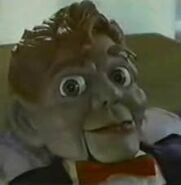 Slappy as he appears in the 2015 Goosebumps film. 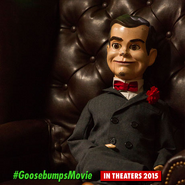 Slappy in Bride of the Living Dummy.jpg 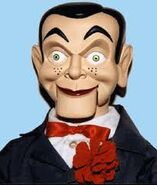 Retrieved from "https://villains.fandom.com/wiki/Slappy_the_Dummy?oldid=1202669"
Community content is available under CC-BY-SA unless otherwise noted.