Ventriloquist dummy (when he is inanimate)

Leader of the Goosebumps monsters

Leading the other monsters in rampages across the city his liberation.

Get revenge on his creator R. L. Stine for imprisoning him and the other monsters (succeeded).

Slappy the Dummy is the main antagonist of the Sony Pictures Animation feature films Goosebumps and Goosebumps 2: Haunted Halloween, which are based on the book series of the same name.

He is the leader of the Goosebumps monsters to be accidentally released from one of R. L. Stine's manuscripts, and proceeds to release the other monsters from their books, wreaking widespread havoc on the town as a result of his liberation.

He was voiced by Jack Black (who also portrayed R.L. Stine and The Invisible Boy) in the first film, Mick Wingert in the sequel, and Avery Lee Jones in promotional media. Puppeteer work was provided by both Jones and Jake McKinnon.

In a reimagining of Stine's past, he originated as an outcast, bullied by his peers. To seek solace, Stine imagined a series of monsters and demons to take revenge on his tormentors. Stine's demons ultimately became a reality, as all the monsters he had ever imagined were created, among them Slappy the Dummy. Slappy was Stine's best friend originally, but Stine ultimately realized that the monsters were too dangerous to society and trapped each of them in his manuscripts, where they remained for years. While trapped, Slappy became disillusioned with Stine and grew an intense hatred to the man for his "betrayal". While Slappy was locked away in the manuscript for Night of the Living Dummy, he was also somehow locked in Stine's first yet unfinished novel Haunted Halloween.

After the Abominable Snowman of Pasadena emerged from the book, the latch on Night of the Living Dummy suddenly unlocked, and Slappy was released from the manuscript. Once Stine returned with teenagers Zach Cooper and Champ and Stine's daughter Hannah, Slappy revealed himself. Upon realizing that Stine intended to return him into the book, Slappy revealing his angry and evil nature promptly stole the other manuscripts, vowing vengeance upon Stine. He released the Lawn Gnomes from their manuscripts as a distraction and then drove off with the other manuscripts. Slappy proceeded to release the other monsters from the manuscripts and set the books alight so that Stine couldn't return them to the books. The released monsters quickly wreaked havoc, destroying a section of the town in the process. Slappy took over the local police station, having his minions freeze the officers into icy blocks.

Zach's aunt Lorraine later arrived at the police station to contact the authorities, but was instead met by Slappy. Lorraine offended Slappy by referring to him as a "talking dummy", prompting Slappy to have her frozen by the aliens. Afterwards, Slappy released the rest of the monsters from the manuscripts and ordered them to find Stine so he couldn't entrap them again as their leader. The monsters lay siege to a nearby high school, where Stine is furiously typing a new story from his typewriter in order to trap the monsters in them. Slappy personally confronts Stine, reminding him that they share a consciousness and that they had once been friends and revealing his betrayal at having been locked away for so many years. When Stine still attempts to complete the story, Slappy breaks Stine's fingers with the typewriter.

After escaping, Stine lured the monsters away from the school by driving a bus down the road. Slappy ordered the monsters to destroy the bus, but upon stopping it, they found that it was filled with dynamite that promptly exploded, temporarily destroying the monsters. This bought Stine and the teenagers some time to an abandoned amusement park, followed by Slappy, who could read Stine's thoughts. Upon arriving at the amusement park, Slappy released the final monster, The Blob, which quickly consumed Stine, but Slappy noticed that Stine didn't had the book. Zach and Hannah fled to the top of a Ferris wheel, pursued by the monsters. Zach managed to finish the book just as the monsters reached them, and promptly opened it, causing a vortex to appear that began to suck all the monsters (except Brent Green, who was a boy turned invisible and thus, not an actual monster) into the book. Slappy, in a final attempt at revenge, grabbed Stine and began strangling him, but Stine kicked him, sending Slappy flying into the vortex, cackling madly until he finally vanished inside. Slappy makes his final vow of revenge, calling out to Stine, "See you in your dreams!".

Slappy was eventually released from Haunted Halloween in 2 years later when the book was discovered by Sonny Quinn and his friend Sam Carter. Though lifeless at first, Sonny reads the incantation "Karru Marri Odonna Loma Molonu Karrano". When the boys leave the house with Slappy, deciding to keep him, they are encountered by Tommy Madigan, a school bully who takes the book for himself. The now-alive Slappy uses his magic to pull Tommy's pants down, giving Sonny and Sam an opening to escape. Tommy and his cronies chase Sonny and Sam on their bikes until they are knocked over by a hose controlled by Slappy.

At home, Sonny is working on his science project, a miniature version of Nikola Tesla's Wardenclyffe tower that he has trouble operating, when Slappy reveals his sentience to the boys. Fortunately for them, he explains that he wishes to be their brother and gains their trust by using his magic to do fold Sonny's laundry and complete his algebra homework. Slappy secretly modifies Sonny's model while everyone is asleep.

The next day, Slappy hitches a ride on the backpack of Sonny's sister Sarah and goes to the auditorium, where her boyfriend Tyler is on a ladder hanging ghosts up. Slappy uses his magic to disassemble the ladder as revenge for him cheating on Sarah the previous night, the fall causing Tyler to end up in the hospital. Meanwhile at Sonny's school, Sonny shows off his now-functional project. However, Slappy's modifications causes the tower to blast a hole in the classroom wall.

After the boys admit Slappy's sentience to Sarah, they return home to confront the dummy. Sonny tries to read the words on Slappy's card to make him go back to sleep, but the idea backfires. After the kids' mother Kathy tells Sonny off for the science lab accident and Sarah for failing to keep things under control, Sarah hits Slappy with a baseball bat, knocking him out.

The kids lock Slappy in a suitcase and dump him into a river. However, Slappy somehow escapes and jumps on in front of Sarah's car. In a fit of rage, he exclaims that he just wants to be part of a family while pounding on the windshield of Sarah's car. Slappy is eventually thrown off the car when Sarah slams the breaks. Unfortunately, as Sonny points out, things have only gotten worse.

While the kids are at home reading about the events at Madison, Delaware, Slappy makes his way to Fred's Pharmacy, intent on making a family of his own in order to bury Halloween alive. Using the "Karru Marri Odonna Loma Molonu Karrano" incantation, Slappy makes to bring several assorted Halloween merchandise to life, including three Ghostly Witches and Goosebumps-themed costumes of the Werewolf of Fever Swamp and the Abominable Snowman. Walter, the manager of the pharmacy, catches Slappy in his act only for a Haunted Mask to fly onto his face, turning him into an Igor-esque ogre that immediately becomes Slappy's right-hand monster. Together, the monsters march out of the pharmacy.

Slappy and Walter go to the real-life Wardenclyffe tower, where Slappy says his incantation to reactivate the tower, thus enabling him to bring all the Halloween decorations across Wardenclyffe to come to life. After Walter completes building a wooden chair with metal cuffs, Slappy instructed him to tell the Halloween monsters to retrieve his "mother", Kathy Quinn, and Haunted Halloween, which they succeeded in doing. Once Kathy is captured and strapped to the wooden chair, Slappy reveals his sentience to his "mother" before using another incantation to turn her into a human ventriloquist's dummy.

When the kids arrive at the Tower while wearing Halloween costumes as disguises, Sarah chases after Slappy, who is intent on destroying Haunted Halloween while Sonny and Sam turn up the Tower's power to a high level, hoping to overload the system. Cornered by the Giant Balloon Spider, Sarah surrenders the book in exchange for Slappy promising to turn Kathy back to normal. However, Slappy discovers too late that the book Sarah gave him was a decoy made from a copy of Mary Shelly's Frankenstein. Sarah then kicks Slappy into the Tower's electric core, shocking him enough to be blasted into the sky, thus turning Kathy back to normal. From there, she uses the book to suck up all the Halloween monsters.

Around Christmas time, Stine adds the now-complete Haunted Halloween to his collection of Goosebumps manuscripts, which he recovered following the crisis at Madison. However, Slappy suddenly appears before him, revealing that he survived and, during his disappearance, wrote a new Goosebumps book starring Stine as the main character that he promptly traps Stine in, finally getting payback after all these years. 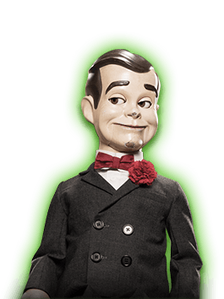 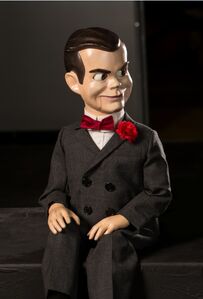 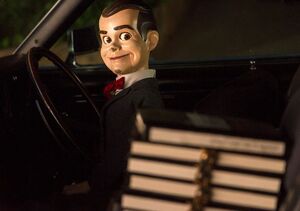 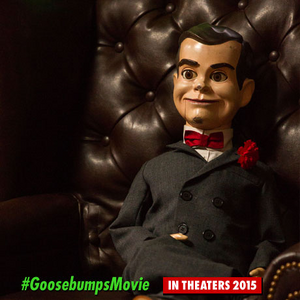 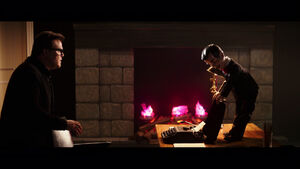 Slappy reads the pages of the book that Stine is writing to put all the monsters back into. 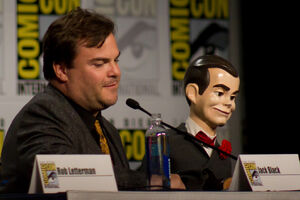 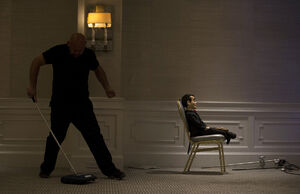 Slappy resting in a chair at the Making of Goosebumps. 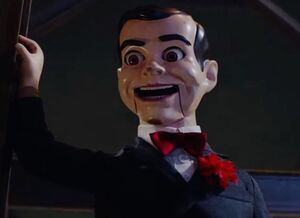 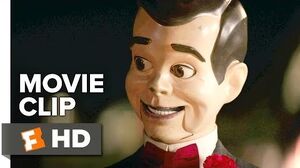 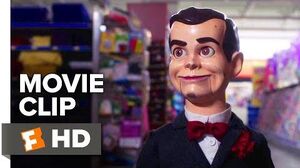