Guarding the entry to Breach

Wipe out human race for Precursors (both failed).

Slattern is a Category V Kaiju featured as the final antagonist of the 2013 Warner Bros. movie Pacific Rim. It is the first generation of its kind, created as the Precursors' ultimate weapon during the Kaiju War.

Slattern emerged from the Breach on the 12th of January 2025, a moment after Striker Eureka alongside Gipsy Danger reached the localization of interdimensional portal. While Scunner and Raiju engaged in a fight with Gipsy Danger, Slattern took on Striker Eureka. Dwarfed by immense monster in size, Striker Eureka revealed its pair of twin blades from its forearms. Slattern landed a first hit in the combat using its triple whip-like tails, sending the Jaeger crashing into rockside. Category V Kaiju then started charging on Striker Eureka, tackling robot across the area. Mark V Jaeger responded by making deep stab wounds inside Slattern's shoulders. Furious Slattern released loud sonic growl from its jaws, summoning Scunner to itself. Knowing they cannot take on two large Kaiju underwater at once, pilots of Striker Eureka decided to detonate thermonuclear explosive on robot's back in attempt to kill both monsters and clear the path for Gipsy Danger. Meanwhile, both abominations charged at Striker Eureka from both sides. Moment before they crashed, Striker Eureka surprised them with thermonuclear explosion.

The explosion managed to eradicate Scunner from existence, but failed to kill Slattern. The monstrous creature landed before surviving Gipsy Danger, who dragged a half of Raiju's carcass in one hand. Colossal robot used Slattern's own strategy against it, activating its jet propulsion to catch Slattern and stab it in the back with its chain blade. Thrashing around while falling alongside Gipsy Danger down to the Breach, Slattern used its tails to stab Jaeger into its back. Using its nuclear reactor, Gipsy Danger burned a hole in Slattern's chest, incinerating its insides. The deceased Slattern then fell along with Gipsy Danger to Breach, teleporting the beast to its homeworld.

Like all from its kind, Slattern is naturally extremely hostile and aggressive creature with highly destructive and relentless behavior. It does not know surrender and will continue the fight even after receiving grievous wounds, stopping only when it's opponent is deceased or when Slattern itself is dead. In combat, creature relies on its brutal strength and triple tails. If its injuries prove severe enough, Slattern will attempt to join its forces with another Kaiju.

Slattern is gargantuan, quadrupedal creature with hammerhead shark-like head. Its hindlimbs are theropod-like with three clawed toes, while forelimbs have three digits with opposite thumb all ending with sharp claws. Monster's characteristic feature are three abnormally long appendages, which can be used as whips and stabbing weapons. Skin is mostly grey in color, accompanied by glowing neon-azure veins all over its body. Radial bone and ulna are covered in skin, making them semi-fused. Slattern has few dorsal fins on its back, as well as sharp stake behind its chest.

Standing at 596 ft. in height and measuring 6750 tons, Slattern is the largest Kaiju in Pacific Rim universe and second heaviest, outweighed by Mega-Kaiju from Pacific Rim: Uprising. Slattern's head is V-shaped, with four blue eyes and reptilian pupils, as well as exposed molar teeth. Lower jaw is powerfully-build and appears to have two protrusions on each side similar to upper jaw. 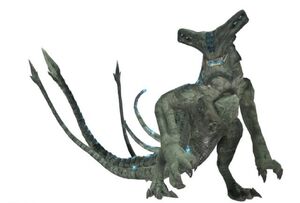 Slattern in the Pacific Rim videogame. 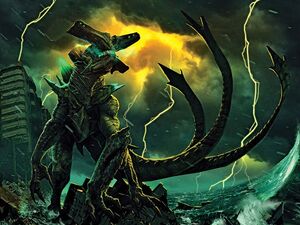 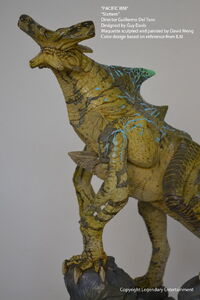 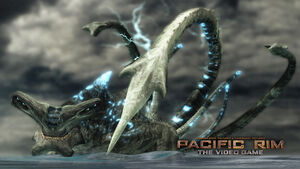 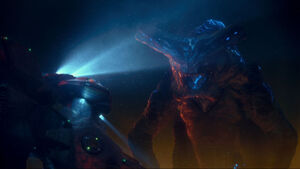 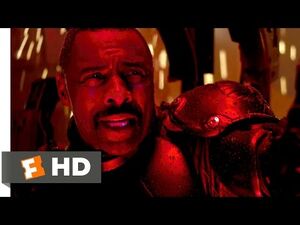