Countless numbers of Uruk-Hai and Olog-Hai

Kill targets for sport and harvest enough corpses for food to be butchered.

The Slaughter Tribe is one of the nine orc factions in the videogame Middle-Earth: Shadow of War.

The Slaughter tribe are the most bloodthirsty of the orcs. Their bloodlust goes beyond any interest in war, conquest, or even torture. They are obsessed with viscera, with blood and guts, with the splatter of warm gore o​n their ecstatic faces.

For Slaughter orcs, killing is messy and usually precedes further acts of savagery and cannibalism. They show an almost complete disregard for their appearance, often wearing ragged aprons or uncured animal skins still dripping with blood.

Slaughter Orcs typically take small trophies from their enemies, such as fingers, hands, and feet, assuming said items haven't been eaten. Likewise, their forts are draped with the skins of their victims, to remind them of the thrill of battle and the pleasure of the feast that follows.

They revel in their reputation for being bloodthirsty, but the bloodthirstiness of the Slaughter Tribe can turn the stomach of even the toughest Uruk. 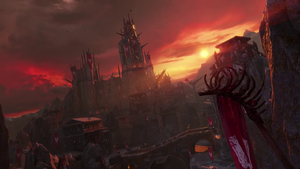 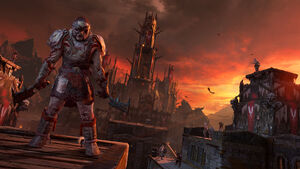 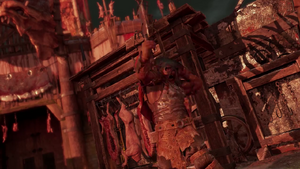 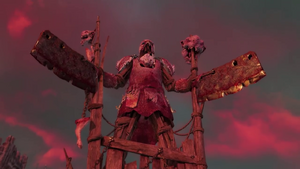 Slaughter Tribe Monument
Add a photo to this gallery 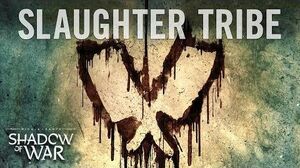 Retrieved from "https://villains.fandom.com/wiki/Slaughter_Tribe?oldid=4377660"
Community content is available under CC-BY-SA unless otherwise noted.