Slayde (スレイダー, Slayder) is a minor antagonist in Fire Emblem Gaiden and its remake Fire Emblem Echoes: Shadows of Valentia.

Slayde is voiced by Yoshimasa Kawata in Japanese. He is voiced by Christopher Corey Smith in English, who also voices Legion, Reinhardt, and Thales.

In both games, Slayde is a purple haired, armor-clad man. In Fire Emblem Gaiden, he is clean-shaven with a large mullet hairstyle, and his armor of purple. In Shadows of Valentia, his hair is much shorter, he has a beard, and his armor is now maroon with gold accents. He also wears a purple cape.

Slayde is a corrupt knight who cares for nothing but to satiate his greed. He arrogantly assumes that having a high rank makes him superior to everyone. Slayde is also willing to compromise his principles in exchange for wealth and power, such as agreeing to assassinate the young Zofian heirs for Desaix, despite being hesitant to do so before the baron offered him a reward. Furthermore, Slayde is a coward who will betray others to save his own life.

Originally, Slayde was a minor soldier in the Zofian army. One day, he was summoned by Desaix, who had ingratiated himself with Zofia's King Lima IV, but was secretly accruing power for himself and planning a coup d'etat against the royal family. As part of his plan, Desaix ordered Slayde to kill the royal heirs. Though initially reluctant to slaughter children, Slayde quickly agrees when Desaix promises him wealth and power. That night, Slayde set fire to the Royal Villa, and assassins slew anyone who didn't perish in the conflagration. For his role in the Villa Fire, Slayde was promoted to captain of Desaix's guard. However, two children survived the night: Princess Anthiese, who was rescued by the knight Mycen, and Prince Conrad, who fled to the Lost Treescape of Rigel.

Sometime later, Slayde and a squad of his men came upon Ram Village while patrolling Southern Zofia. Encountering several children playing in the forest, Slayde demanded that they bring him and his men food and lodging before recognizing one of the girls as Anthiese, though she now called herself Celica. He prepared to make up for his botched assassination, but was driven off by Mycen. Unfortunately, this incident forced Celica to leave Ram.

Years later, war broke out between Zofia and Rigel. Desaix negotiated a cease-fire in exchange for control of Zofia as Chancellor. The Rigelian Army remained garrisoned in Northern Zofia, and Desaix imposed heavy taxes on the people in the name of compensating the Rigelian Empire. Soon after, the Chancellor completed his coup with the assassination of Lima IV. Around this time, a group of resistance fighters called the Deliverance emerged to liberate Zofia from Desaix. Slayde continued to serve as Desaix's captain, helping to establish a body double of the Chancellor and defending Zofia Castle when it's stormed by the Deliverance.

The battle of Zofia Castle ends in the Deliverance's favor, and both Slayde and the real Desaix are forced to retreat. While Desaix travels to his personal fortress in Northern Zofia, Slayde hides in the castle grounds and encounters members of the Duma Faithful, who just tried and failed to capture Celica and deliver her to Duma himself. Fearing that he has outlived his usefulness to Desaix, Slayde tells the Faithful about a village Northwest of the castle inhabited by gifted mages. In exchange for this information, he convinces them to allow him to serve the Rigelian Empire.

After a long grueling war, the Deliverance storms Rigel Castle, encountering Slayde. Before the battle, Slayde personally greets the Deliverance and explains his rise to captain of the guard in Rigel. The soldier Clive calls him out for being nothing more than an opportunistic coward who would sell out his homeland for power; enraged, Slayde orders his forces to attack the Deliverance. However, his forces are overpowered and Slayde is killed during the battle. 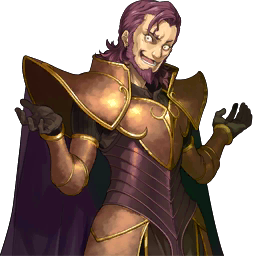 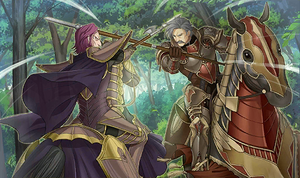 Mycen protecting the Ram children from Slayde.
Add a photo to this gallery

Retrieved from "https://villains.fandom.com/wiki/Slayde?oldid=4188683"
Community content is available under CC-BY-SA unless otherwise noted.