Hunting Energems and criminals with promising strengths for his crew.

Acquire the Energems and conquer the universe (failed).

Aiding his employer Lord Arcanon to recruit outlaws that he captured into his army (formerly).
Destroy Lord Arcanon to acquire the Energems for himself (succeeded).
Cause destruction on Earth with Greenzilla's offsprings (failed).

He is an intergalactic bounty hunter who wishes to obtain the Energems and use their power to conquer the universe, but is opposed by the Dino Charge Power Rangers. He orbits the Earth onboard his spaceship, joined by his generals Fury, Wrench, and Poisandra (who is also his fiancé). His monsters are in actuality the outlaws he has captured during his years as a bounty hunter, to who he promises freedom if they manage to retrieve the energems for him. Whenever they are destroyed, he fires an energy blast dubbed the Magna beam down to Earth that fired from the Magna Cannon installed on his ship, reanimating it and causing it to grow.

In Power Rangers Dino Super Charge, it is revealed that he has not coveted the Energems for himself, but rather his employer Lord Arcanon, a powerful alien whom entrusted him the job to turned all outlaw monsters into his army. Sledge finally decides to eliminate Arcanon.

He was voiced by Adam Gardiner.

65 million years ago, Sledge attempted to steal the Energems from an alien known as the Keeper, eventually shooting him down over planet Earth. Surviving the crash, Keeper entrusted the Energems to various dinosaurs for safekeeping, and tricked Fury in to bringing a bomb onboard Sledge's ship. The resulting explosion sent Sledge and his crew careening off into space and releasing all of the asteroids Sledge had collected, leaving Fury stuck on Earth while the asteroids impacted the planet, causing the extinction of the dinosaurs.

Sledge returns in the present day to once again claim the Energems for himself, only to find himself opposed by the Dino Charge Rangers, a group of teenagers founded by Keeper who fight and defeat the monsters he and his generals release into the world, as well as finding the Energems before Sledge.

Eventually, Sledge, fed up of Poisandra's constant nagging, has Wrench create Curio in order to keep her occupied while he and the other generals focus on retrieving the Energems.

In season finale, he managed to acquire the Purple and Red Energems as well as capture Keeper, but this resulting the final battle that crashed his ship and costed him his worst monster, Greenzilla. The resulting crash and damages that the heroes caused made him presumably killed, but in reality he survived (albeit wind up separated from the others during the crash) and biding his time for return.

His temporal absence was allowed Heckyl and Snide to temporarily taking over the leadership of his minions. Instead of immediately goes to retake his position, Sledge, whom discovered a batch of Greenzilla's eggs, six in all, decided to spread the eggs all over the planet whilst keep in touch with Heckyl to be in charge on his crew until Lord Arcanon arrived on Earth. Also, due to boredom from his duty on his ship, he briefly relaxing on Earth.

By the time he returned for his crew and revealed to Lord Arcanon that he fed up from worked for him, Sledge took the dark Energerm for himself and use it to destroy Arcanon and Singe, as well as Conductro and Screech. Finally reunited with his crew, and allied with Snide now, Sledge regained control of his ship with some plans to destroy the Earth. He sends Badussa against the Rangers to gain the time to repair his ship.

In season finale, Sledge causes his own demise: he betrays Snide, in offering the Dark Energem to Poisandra instead of him (as gift of wedding) and wants to send him on a suicidal mission against the Rangers without knowing that Snide has heard all. Later, after his six Greenzillas were destroyed, he refuses to send the Magnabeam to Snide, chocking Wrench, and Snide is destroyed by the Rangers and Heckyl. Then he uses the Greenzilla's eggs to deploy his magnetic nets to send the Earth in a space discharge and take over the Energems. To stop him, the Rangers destroy the Dark Energem, with the help of all humans and Sledge is seemingly killed with his crew when they are sucked into a black hole (or wormhole).

In the final battle in the past, between Sledge's Crew and the Rangers, Sledge fights the Rangers (Shelby, Chase, Riley, Koda and Ivan) with Fury and the Vivixes. Fury gives him the container with the remaining Five Energems, but Tyler who rejoined the fight has replaced the Energems by the Guardian's bomb. Sledge comes out narrowly but Fury is killed by the explosion. Devastated by Fury's death, Sledge, who was a match for Tyler in his T-Rex Super Charge form during the battle, later uses the Magnabeam and beats the Rangers and the Guardian. He is about to crush them when Heckyl capture him with his magnetic nets and Sledge is finally killed with the rest of his crew when Heckyl leads his ship into the Sun.

Sledge returns in Power Rangers Super Ninja Steel. While his past self was destroyed at the end of Dino Super Charge, his and his crew's present selves survived being sucked into the black hole, ending up in the Ninja Steel universe. Upon finding that there are no energems in the Ninja Steel dimension, they stumble upon the wreckage of Glavanax's Warrior Dome. Upon learning that the Super Ninja Steel asteroid stuck on it is made of a rare metal, Sledge docks his ship with the Warrior Dome and boards with Wrench and two outlaws to retrieve it. He initially plans to sell the Warrior Dome for scrap, but after encountering Madame Odius and Cosmo Royale, Sledge offers to repair the ship for them in return for the Super Ninja Steel Meteor.

Though a hot-tempered and irritable individual, Sledge bears multiple layers to his personality like every being in existence. If anything, the fact that he is easily angered, resentful, and mischievous is one of his greatest flaws to the point it could impede his ability to cooperate with allies and enemies alike. Typically, it wouldn't seem this way, but he values the opinions of his generals. As a means to cope with his anger, he threatens punishment to his generals for the sake of amusement, although he won't tergiversate to use true discipline if deemed necessary. While Fury and Wrench are the most authoritative and trusted generals, there is only one being he is truly in love with, and that is Poisandra. Though rarely shown, he is shown to be confident of Curio as well. There are times in which Sledge suffers from a crisis, something that could lead to tension between the couple: choosing between love and power. Love represents Poisandra while power represents the Energems. Eventually, he would compromise with himself that having both is possible. He is also shown to be willing to trust Heckyl to lead his crew and be in friendly and kind terms with Snide (who became his partner), and initially a stable and intelligent relationship with his employer, but eventually growing to be completely destructive and inimical to Lord Arcanon. 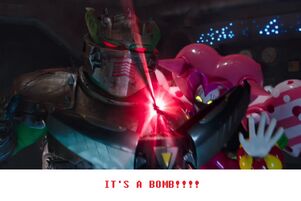 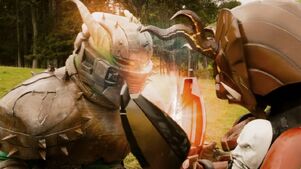 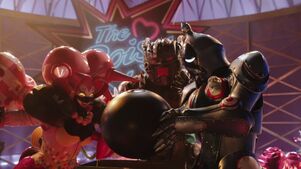 Sledge, Poisandra & Wrench before Their death by Bomb at the hands of Dino Charge Blue Ranger 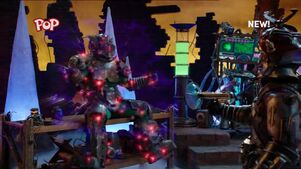