Sledgehammer is a supporting antagonist and the first subordinate faced in Clock Tower 3. He used a hammer to bludgeon his victims.

He was voiced by Robert Perkins.

As Sledgehammer, Robert Morris was a stonecutter who killed 26 victims and sentenced to 486 years. He did not serve it, but he was hanged instead. He was resurrected due to his status as a subordinate for Lord Burroughs.

Alyssa Hamilton arrives in a war ravaged 1942, London. She enters a store and witnesses Sledgehammer bludgeoning a twelve year-old pianist, May Norton, to death. He then chases her to a concert hall. In the main performing room, Alyssa leaves a pocket-watch on the piano, which was given to May by her father. Outside, in the courtyard, Alyssa gains her bow and arrow and defeats Sledgehammer.

Sledgehammer's ghost would appear with the other subordinates during Lord Burrough's ritual. 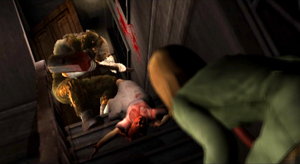 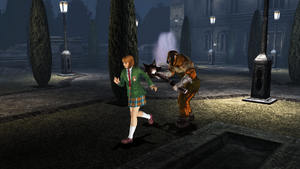 Sledgehammer stalking Alyssa in Hard Mode.
Add a photo to this gallery 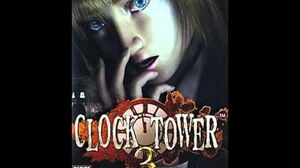 Retrieved from "https://villains.fandom.com/wiki/Sledgehammer?oldid=3816593"
Community content is available under CC-BY-SA unless otherwise noted.