Be allowed to sleep in peace (failed).

Sleepyhead (sometimes spelled Sleepy Head) is a Rhynoc wizard and a minor antagonist in the videogame Spyro: Year of the Dragon.

Sleepyhead is a blue Rhynoc magician dressed in a star and moon-filled green pajama and wearing a pointy hat with the same color and same symbols on it.

Sleepyhead is a simple wizard residing in Spooky Swamp, a realm in Midday Gardens of the Forgotten Worlds. He is suddenly unfair and dangerous towards his fellow inhabitants and demanded he wants sleep with peace and quiet. This behavior is maybe the result of the Dragons being banished from the Forgotten Worlds by the Sorceress centuries ago. Sleepyhead by name, sleepyhead by nature, Sleepyhead simply loves to sleep and dream.

Awoken by Spyro's activities lighting the tea lamps of Spooky Swamp, Sleepy Head was so angry he stood still and waited for the dragon to turn up so he could attack him. Unfortunately Spyro did indeed turn up and proceeded to defeat Sleepy Head.

Sleepyhead is a powerful and crafty magician who uses magic to get rid of his enemies as well as make his life easier.

He can create artificial bombs made of magical energy that can do some damage.

Sleepyhead will then summon three Gators and sent them to attack their enemies while throwing another bomb at them.

The bombs yet prove to be Sleepyhead's weakness. They can be pushed at him again and again until his health is depleted and he is defeated. 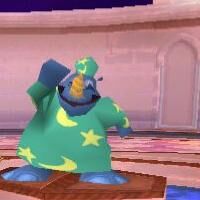 Retrieved from "https://villains.fandom.com/wiki/Sleepyhead?oldid=3460481"
Community content is available under CC-BY-SA unless otherwise noted.