Kill anyone who enters on his territory.

Slenderman is a major antagonist of the Slendrina horror series.

He wears a black suit and a tie (the tie changes colors for different Slenderman games). His skin is very pale and white and has no face. He also has long limbs, which makes him very tall, and tentacles on his back, which he uses for attacking along with his gaze and soul sucking. Slenderman's appearance is basically near identical to his appearance in the original Slender series.

He is the primary enemy, with Slendrina, and the fear master, just like the original Slendermen, of The Child of Slendrina. Although he isn't the main nor central antagonist in the series, he can be strongly considered its most powerful antagonist, as he is a dark supernatural entity and the father of Slendrina.  He only appeared in the 4th and 6th game, but he may also have helped Slendrina escape the holy books when the player imprisoned her. In TCOS, Slenderman acts as the version of Slendrina in the ground floor of the house. While her daughter is only active in the cellar with her child, Slenderman is Slendrina's counterpart for the rest of the house. 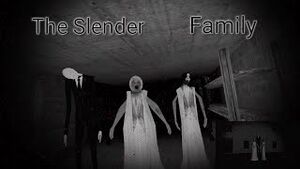