Villains Wiki
Register
Don't have an account?
Sign In
Advertisement
in: Contradictory, Aliens, Doctors and Scientists,
and 20 more

Killing other living organisms and feeding on their blood.

Kill the humans on Earth and suck out their blood (failed).

Slim is a nine-foot tall Killer Klown and one of the central antagonists (alongside Jumbo) of the 1988 sci-fi-horror-comedy film Killer Klowns from Outer Space. He is the true reason why the main human characters were caught up in the Killer Klowns' massacre on Crescent Cove, the town where the film took place. He was the tallest as well as one of the most powerful Klowns in the film and his Tyrannosaurus shadow puppet was able to kill many people who were swallowed by it.

Slim began his role in the alien invasion using shadow puppets. He was entertaining a group of people with shadow puppets from a rabbit, an elephant, George Washington and his crew on a boat crossing the Delaware River, a dancing lady, and then a Tyrannosaurus rex. Police Officer Hanson and Mike Tobacco, the film's protagonist, saw Slim use the Tyrannosaurus shadow puppet to swallow up the humans that were watching before they ended up shrinking and being inside Slim's hands. The human victims were heard screaming in Slim's hand and Slim then put them inside a bag with 100s of other popcorn apparently showing that Slim was feeding the baby Klowns. Mike became terrified and angry at this, trying to run over Slim with Officer Hansen's police car, but Slim was able to jump up the entire building where his shadow puppet was laid upon to avoid getting hit.

Slim was then seen on the highway pretending to drive a motorcycle that is extremely fast. This allows him to ram someone driving off the road and crashing before dying in an explosion with Slim laughing evily at his victory.

Later on, Mike's girlfriend Debbie was being attacked by Killer Klown offspring (planted from popcorn) and she ran away from her bathroom. She heard Slim say "Debbie, Debbie It's Mike open up" in an exact replica of Mike's voice at Debbie's front door, which made Debbie open it to find Slim there. Debbie closed the door shut until she heard loud jackhammer-like noises coming from Slim trying to break open the door. Four Killer Klowns barricaded the window Debbie was about to jump out of using a trampoline in case she tried to run off from Slim. Slim then held her in the air while she screamed in horror before throwing her onto a couch and two other Klowns, Rudy and Bibbo, showed up with Slim at her home. Slim then used a device that trapped Debbie inside a giant balloon (either to take her away as food or to turn her into a female Killer Klown).

Mike arrived with the Terenzi Brothers in an ice cream truck to find the Klown Kar parked right next to the apartment building that Debbie lives in. Slim saw Mike behind him, recognizing Mike as the human who tried to ram him over for using the shadow puppet to swallow people. Mike saw Debbie scream for help inside the balloon strapped outside of the Klown Car, forcing Mike to chase the Klowns to rescue Debbie. Slim rode in the Klown Kar and took off very quickly with Mike, the Terenzi Brothers and Officer Hansen who just recently joined them pursuing the Klowns.

The Klowns who rode in the Klown Kar had arrived at the amusement park where their UFO hot air balloon-like spaceship, the Big Top, had landed on Earth. There, a police officer claimed that the park is closed and ordered them to leave. The 5 Klowns (Slim being the first one to come out) got annoyed at how the police officer denied them access to their headquarters. They took out their pies, to which the policeman in an annoyed manner asks "What are you going to do with those pies, boys?". The Klowns then throw several pies at the policeman, which melts him to the skeleton. Slim then pulled out the balloon Debbie was trapped in before the 5 Klowns entered their headquarters. After Mike and Hansen freed Debbie from the balloon, they were cornered by the Killer Klowns who were using whack sticks to pummel them, with Slim joining them. However, the Terenzi Brothers crashed in with their ice cream truck and used their megaphone system to make the Klowns think that the plastic clown head on top of their Ice cream truck (called Jojo) is ordering them to let Mike, Debbie and Hansen leave unharmed. Soon, the Klowns' real leader, Klownzilla came in with all the Klowns leaving before he landed, and started attacking Officer Hansen. After Hansen used his police badge to spear Klownzilla's nose, the Klown leader exploded, causing the entire Big Top to explode in the sky with Slim inside as well. 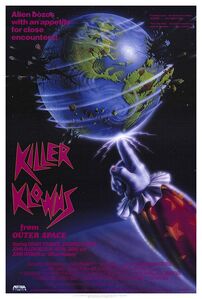 Slim's hand in the film's poster spinning the planet Earth. 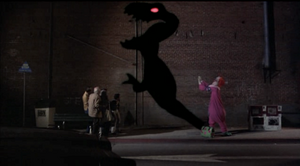 Slim with his Tyrannosaurus shadow puppet. 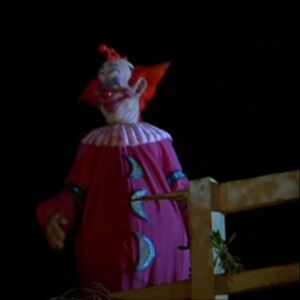 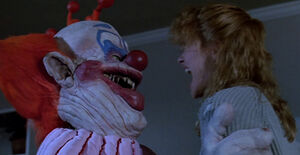 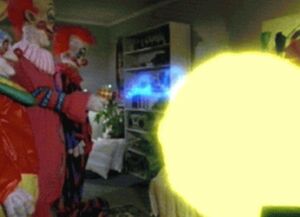 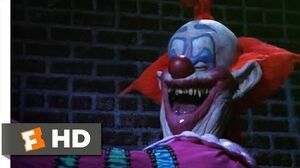