Russel "Slim" Biggins is a one-time villain from The Cleveland Show, only appearing in the episode "Cleveland's Angels". He is the corporate hack owner of The Big Nugget Riverboat Casino.

He was voiced by Brad Leland.

In "Cleveland's Angels", Slim drove his riverboat casino to the docks of Stoolbend. Cleveland and the guys went there and happened to meet him in person. Cleveland got very lucky and started winning a bunch of casino chips, earning himself the way into Club Nugget. Cleveland was on a roll, but in 12 minutes, he lost his glory and was dropped from the club. Cleveland bet Roberta's college fund, which failed, but this was on account of the casino workers cheating, by distracting Cleveland and switching out the cards.

Cleveland begged Slim for a way of making money. Slim graced him, by allowing him to be a bartender, so he could manually earn his money back. Cleveland was liking the job, when he started, but then he was quickly replaced by Ted Lange. Slim reassigned him to be the janitor, along with a series of other ridiculous and humiliating jobs.

While doing these jobs, Cleveland witnessed Holt blow his wad at the same gambling table in the same way he did and realized he was cheated out of it, and in the same way he was. Cleveland confessed to Donna what happened, and told her about the corruption in The Big Nugger Riverboat Casino. Kendra heard about this, and said this same thing happened to her in 1962. Donna, Kendra, Arianna, teamed up to take Slim down, Charlie's Angels style. They would out-corrupt the corrupt casino, by having Donna distract Slim Biggins, while Kendra won fair and square. Slim was pissed off about this, and he threatened them to give him his money back. Fortunately, Holt busted in, driving his mother's car and saved them.

Slim Biggins is a large framed old man, who dresses like a stereotypical cowboy. He has a big white ten gallon hat with a golden hat stripe. He wears a white buttoned shirt with a slightly darker white cowboy vest and jeans. He also wears shoes that are just as white as his buttoned shirt.

Slim Biggins is a loud, boisterous, perverted, greedy, and secretly corrupt old man, who shamelessly scams his customers out of their money. He cannon accept defeat and threatened to kill Cleveland, Donna, Arianna, and Kendra, if they took off with their well-earned money. 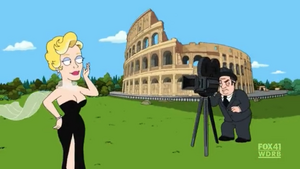 Slim Biggins, filming Kendra by the Roman Colosseum in 1962.
Add a photo to this gallery

Retrieved from "https://villains.fandom.com/wiki/Slim_Biggins?oldid=3840377"
Community content is available under CC-BY-SA unless otherwise noted.