Murder his wife (both succeeded).

He is played by Marshall Mathers himself, better known as Eminem, being the best known alter-ego of the famous rapper.

Slim was originally a short, skinny, and pale man. With bright blond short hair. He usually had some sort of crazed grin. He also had several tattoos on his arms. He frequently wore a completely white T-shirt with blue jeans. Although, in certain videos he is seen wearing a jacket. He eventually began getting brown hair and soon a short beard. He began wearing grey hoodies rather than plain white shirts. On "Music To Be Murdered By" he is shown wearing a suit. In his earlier days he was also shown wearing a blue (occasionally orange) jumpsuit and a white cap.

Slim is usually depicted as a violent, sociopathic criminal. He has a very large ego. He also seems to not have any sense of right-or-wrong. Despite this, in "Stan" he seems visibly disturbed by His crazed fan's letters. He is also addicted to drugs. He does seem to genuinely care for his daughter, however. He is also very perverted with it even being mentioned that he possibly committed rape.

Slim came from a abusive and toxic household, much like Marshall Mathers. He was also frequently bullied and picked on, especially by a kid named DeAngelo Bailey. Slim was best friends with young Marshall at a young age due to the two's fondness of rap. They decided to create a rap group named "Eminem". Slim ended up being picked up by a studio and abandoning Marshall to enjoy fame. This is also where he met his girlfriend Kim. However, this is also where he would begin his criminal reign. He would make his way into the world of organized crime. He would hire several "arms" to assist him during his crimes. He soon forms his own gang. He also becomes a father to his daughter, Hailie.

In the music video for "My Name Is", Slim is shown to be running some kind of multi-channel TV show called The Slim Shady Show. He is seen wearing numerous costumes through the video as well, perhaps to fool people into believing that he is someone he is not.

In the music video for "Role Model", we see Slim filling in as a priest. He is obviously terrible at his job. He berates people while in a confessional, goes against the church, etc. After being fired, he got a job as a stunt man. However, he has a near death experience when he fails to take proper safety percussions.

In "Kim", Slim gets into a very heated argument with his wife, Kim (whom it's hinted at cheated on him). This argument leads to him driving her out into the middle of nowhere and slitting her throat.

In the music video for "97' Bonnie And Clyde", the story started in "Kim" continues as Slim disposes of the body of his wife along with his toddler daughter. He dumps the body into a lake and drives away. This seen appears to be shown on the commercial cover of The Slim Shady LP.

In the music video for "Stan", Slim begins to receive late letters from a crazed and obsessed fan named Stan. Stan idolizes Slim for his music and considers him his best friend, despite the fact that they have never met. Slim finally receives Stan's letters, but by then, it's too late. Stan had went crazy and drove him and his pregnant wife off a bridge, killing them both. Slim is visibly disturbed when he discovers this, and lets out one final "Damn!" before the music video comes to a close.

In the music video for "The Real Slim Shady", Slims is sent to a mental hospital where he acts like a pest and raps about how he is going to save the music industry and become the best rapper of all time. He annoys the staff and aggravates the patients, and for this, he is kicked out of the facility.

In the music video for "Without Me", Slim assumes the role of a superhero. He is the sidekick to Dr. Dre whom is also a vigilante, almost like Batman. He is called by his partner to track down a troubled youth whom buys Slim's CD, but it too young to be listening to Slim's adult music. Slim and Dre track him down and confiscate his CD.

In the music video for "Just Loose It", Slim is now on stage entertaining a large crowd of people as Michael Jackson runs amuck the town. He later on strips naked and runs through the city completely nude, and is soon caught and arrested. He also takes on the role of a mall Santa, but is awful at his job.

In the music video, Marshall Mathers, is forced to fill-in for Slim during a concert. Hailie informs Marshall that Kim, who is somehow still alive, has attempted suicide. This leads Marshall to finding a gun backstage and killing Slim Shady. Marshall then marries Kim and becomes successful.

Eventually, Marshall is tracked down by the police who believe he is actually Slim. Marshall makes his way to a parking lot where he resurrects Slim Shady. Slim is then arrested and sent to prison for his crimes.

In "Bad Guy", Slim is kidnapped by the little brother of Stan, Matthew. He is tied up in his car and is driven to a bridge. When Slim wakes up, he finds himself on the bridge, where Matthew is trying to kill them both. Slim fights Matthew off, before passing out.

During his time at Marshall's, Shady asks Marshall to bring him to see his ex-girlfriend who he keeps constantly receiving annoying texts, emails and calls from. Shady goes into things with the intent to shoot her in the head, although fails to mention the detail to Marshall until they're on their way there. After finding out that on top of constant texts and calls she's actually dating another man, Shady compulsively runs out into the open and Shoots her boyfriend before, Marshall tries to combat the situation by speeding the car towards Shady. Although preventing him from killing his girlfriend, Marshall ends up attracting more attention towards the direction of the authorities. After taking part in a large car chase, the two end up crashing into a forested area, forcing them to take on a huge armada of officers. After finishing off the officers, they are almost killed by a final hidden officer, before being saved by old friend and Eminem collaborator, Obie Trice. Obie explains that he heard the whole situation and fled to the area to help the two take on the cops. The three quickly make their escape before finding that, Dre was kidnapped by an unknown party. Royce explains That they came in raided something from Shady's intel, on locating the area of the late, Sean Price's Soldier Arm. To try and find the kidnappers, Shady and Royce make their way to roughly the area of which they thought the arm would be at. Finding a group of thugs also in the area, they use them as bait to get control over the arm and get Intel on their leader, whom they admit has taken Dre. After acquiring the arm, named The Imperius Rex. Also finding, the source of the kidnapper, a thug boss going by the alias The D.O.C. Shady's whole crew make their way to The D.O.C.'s own strip club. Using the Imperius Rex and Royce's personal machine guns, the two open fire and are tasked with taking out all the thugs in the club. Eventually make their way to D.O.C. who after being threatened, reveals to them that Dre is being kept and held captive in a trailer not far from the area. After quickly making their way to the trailer with the help of Marshall, they find Dre tied up in the trailer as stated. Shady almost get's caught with Royce being found by the thugs as they enter the trailer. Feeling Dre and Royce need punishment, the thugs agree to stab Dre in the eye with a knife while Royce watches. With only Marshall left outside, he's pressured to come up with a plan. Quickly finding a chainsaw outside the trailer, Marshall warns Shady to get ready for action. As Dre's about to be stabbed Marshall busts through the door and throws the Chainsaw to Shady. Catching it in mid-air, Shady in one shot, brutally cuts up the thug planning to torture Dre. Going ballistic Shady continues to slaughter the other thugs with the Chainsaw. Seeing the Chainsaw as useful, the crew call up their weapon dealers to make some modification to the Chainsaw. While there Dr. Dre explains that the whole incident is the result of an event that occurred years ago, with some murders he committed during the Compton riots. At that same time, Big Naz finds Crips outside the shop warning Shady and Dre. Not long after, a truck rams it's way into the side of the building driven by a mercenary by the name of, Redman. Carrying Dre out, Shady and the rest of the crew make an escape out the area with Shady proclaiming that he will get back at Redman for trying to kill them. After losing the Crips, Dre further elaborates that a man going by the name Suge Knight, the one likely to be responsible for his kidnapping and Crips coming after them. Shady immediately recognizes the name as a crime boss who has possession of multiple rare soldier arms, including Makeveli, Eazy, and Big Poppa.

In the music video for "Framed", Slim is locked in a room with a murdered family. He tries to convince the viewer that he didn't do it and he's just hear by coincidence, but it's very obvious that he did, in fact, commit the crime.

In the music video for "Godzilla", Slim gets extremely drunk. He tries to make his way through a crowded area, and return back to his car, however he is halted by a clone of him. The clone seemingly kidnaps him and ties him up in his car. The clone then goes on a killing spree, before being attacked by Mike Tyson. Mike, Slim, and Dre send the clone to a hospital where they operate on him, before killing him. It also appears that Slim hangs out with two Godzilla-like creatures.

In the music video for "Guilty Conscience", it seems that ether the devil or a dark figment of the mind, takes the form of Slim Shady in order to convince people to do bad things. 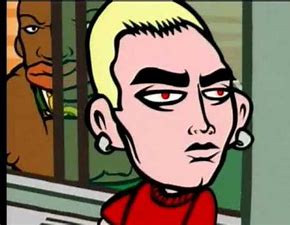 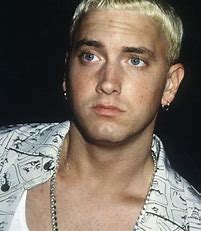 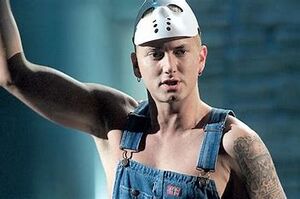 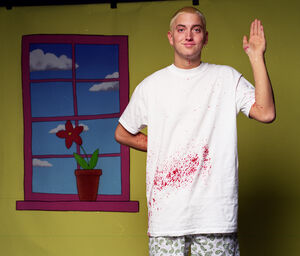 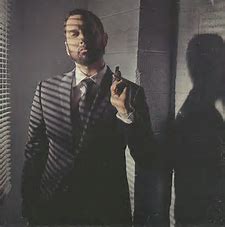 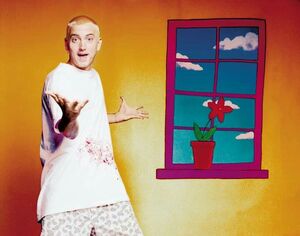 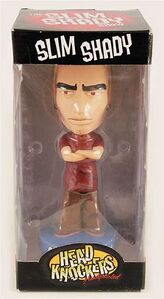 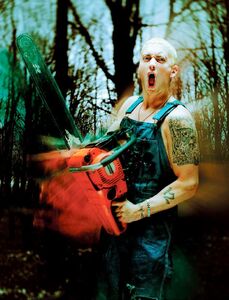 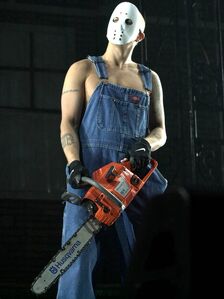 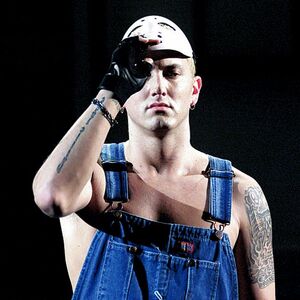 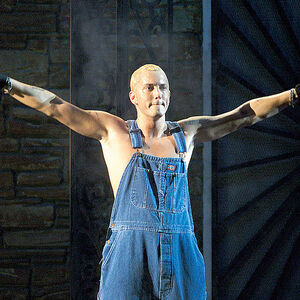 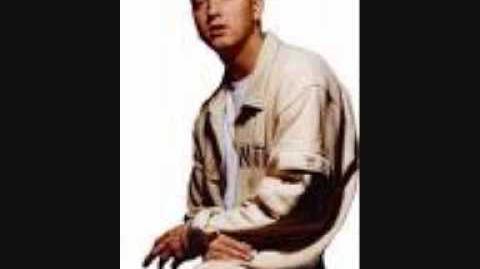 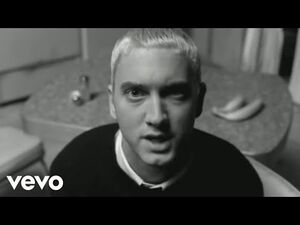 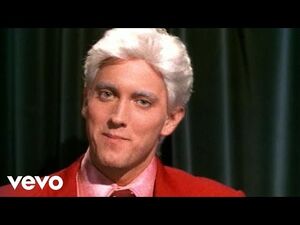 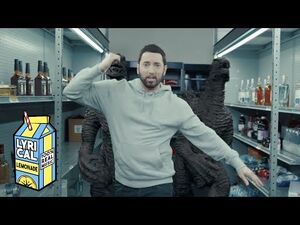 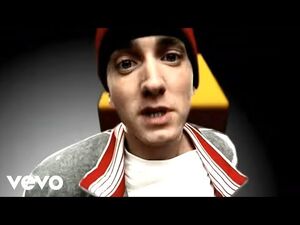 Eminem - Without Me (Official Music Video) 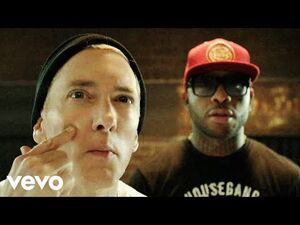 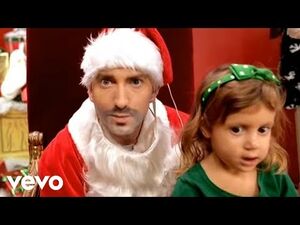