The Slime Monster is a minor villain on Teen Titans Go! who has appeared in a few episodes. As his name would suggest, he is a giant monster, who is a ball of slime. He attacks the city and is known for getting things very messy. His first and most major appearance was in "Laundry Day".

In "Laundry Day", The Slime Monster attacked Jump City and The Teen Titans had to fight him. Every Titan landed an attack on him, but whenever they did, the Slime Monster would use his slimy essence to absorb whatever weapon that was thrown at him and then launch it back at them. This went on for some time before Robin threw an exploding birdarang at him, which blew him up. In the process of doing this, the Slime Monster's slime was splattered all over the place, making a huge mess all over the already collaterally damaged Jump City. This included a giant glob of slime landing on the Teen Titans, trapping them in there and making their clothes extremely disgusting.

The Slime Monster made a background cameo in "Garage Sale", where he, along with Gizmo and Klatak, attacked Jump City. They were all frozen and soon later unfrozen in time, due to an unrelated storyline.

In "The Inner Beauty of a Cactus", Starfire tried learning the languages of people by kissing them. She attempted to kiss the Slime Monster and the Slime Monster was shown to be going along with it as he was willfully preparing to kiss her back. However, Robin threw an exploding birdarang at him and destroyed him before they could kiss. 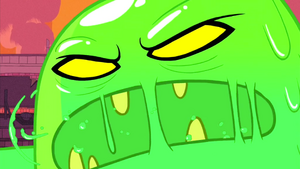 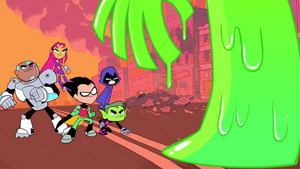 The Teen Titans facing off against the Slime Monster. 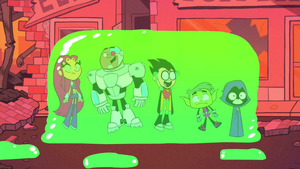 The Teen Titans getting trapped in the exploded goo from the Slime Monster. 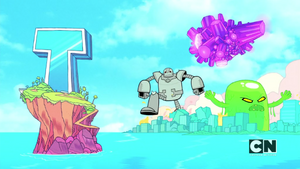 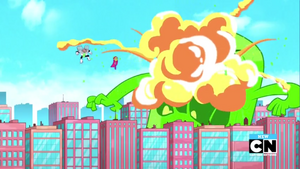 The Slime Monster getting blown up in "The Inner Beauty of a Cactus".

The Slime Monster, among near-countless other villains, all shown in the audience of The Titans Show.