Claim themselves to bre not evil (some)

Help the Hero and his party

Slimes (スライム, Slime in Japanese) are the most recurrent and notorious enemies in the Dragon Quest series of role-playing video games, appearing in all of the main games and spin-offs. They are, not surprisingly, the mascots of the franchise.

Slimes come in different colors, shapes and even places in hierarchy. The common and most representative Slime is blue and shaped like a gumdrop. Other notable slimes include She-Slimes, which are red and are also a tad stronger: Bubble slimes, which are green, bubbly and have a melted complexion; and King slimes, large and stronger blue slimes with a crown on top. There are other less common varieties like the Mottled Slimes, which appear in the Dream World; the Sea Slimes, that can be found when navigating oceans; and Dark Slimes, that make their residence in the Dark World.

Usually, the regular blue Slimes are usually among the weakest enemies, albeit to Goombas from Super Mario Bros. or Metalls in Megaman games, but there are stronger types of slimes that make formidable foes and even bosses, such as the Shogum.

Slime Stacks and King Slimes are formed when three or eight slimes, respectively, merge together. The monster called Canzar is the largest Slime so far, rivaling the Liquid Metal King Slime and the Metal Star Slime.

There is a certain kind of slime, the Metal Slimes and all of their varieties (except for Metal Slime Knight), that are known for the massive amount of experience they give out when defeated; but their defense and evasion parameters are ridiculously high AND they tend to run away very easily, they make up for this by having really low HP. The stronger the metal slime family member is, the more experience it gives out. Experienced players are on the lookout for these and use attacks like Parallax to finish them in one hit. Slimes with an analogical feature are Gem slimes and Gem jamborees, instead of large amounts of experience, they give out large amounts of gold. A giant Liquid Metal King Slime appears in Dragon Quest Monsters: Joker 2. It is a three-space monster that floats.

Finally, there are slimes who are good-natured and act as non-playable characters, party members, and even protagonists of their own games (namely the Slime Morimori / Dragon Quest Heroes Rocket Slime series). When this is the case, they normally fight their rivals, the evil Platypunks, which is another Dragon Quest monster species.

Slimes appear as enemies in the episode "The Trojan Dragon". They look more menacing than in the games and attack by spitting acid.

A slime appears as a playable character, unlockable by either playing 28 matches for one sport or clear the Slime mission in the Flower Cup. It is under the Tricky class, with its highest stat being power, but suffers from weak speed and technique. Its special shot makes it summon copies of itself in the court, with the copies stunning any character they touch.

A slime appears as a playable character in each of the Fortune Street party games. It is under Rank D difficulty.

Slimes appear in the background of the Yggdrasil's Altar stage, three appear during one of Hero's victory poses, Slime and Metal Slime earrings are present in Solo's (the main protagonist of Dragon Quest IV) costume and one appears during Hero's down taunt. None of them affect gameplay.

Another slime appears as a primary grab type spirit, with its spirit battle being a stamina battle against five blue Kirbys, and then a giant blue Kirby on the Battlefield form of Gaur Plain. At level 99, it can be enhanced to become a King Slime, whose effect greatly increases the fighter's weight. A Liquid Metal Slime also appears as a support spirit, whose ability increases movement speed. Its spirit battle is a stamina battle against a metal Kirby equipped with super armor and a Franklin Badge on the Battlefield form of the Great Cave Offensive. All fighters have increased movement speed and defense, but weakened attack power.

According to Sakurai, if the idea for Hero being in Super Smash Bros. Ultimate was turned down by Square Enix, Sakurai would have completely fine with using the Slime instead.

A very common way to defeat them was to use Hatchet Man, as they have a half-chance to land a critical hit. 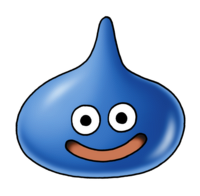 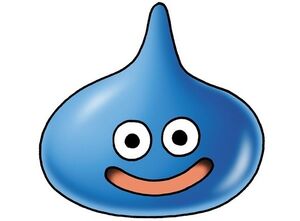 Slime, as it appears in the original NES Version. 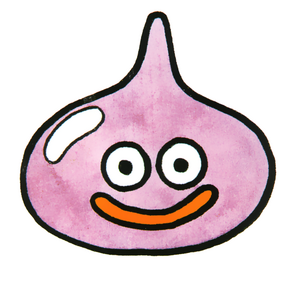 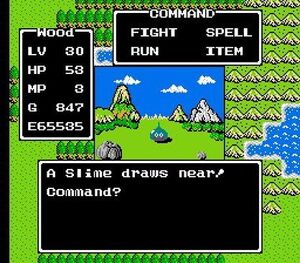 A Slime encountering the Hero/player in the original NES game. 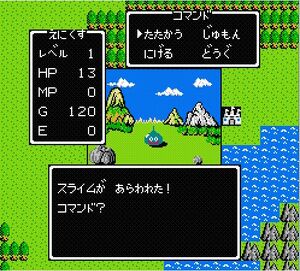 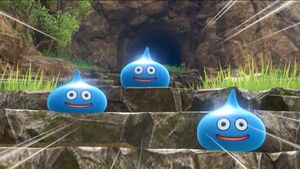