The Slinker is a plant-like corrupted gem with root-like tentacles and a square gemstone inside it. The Crystal Gems detected in Amethyst's room of the Crystal Temple. It slithers and scurries in Amethyst item piles and even manages to destroy her physical form multiple times. When it tried to consume her gemstone, Garnet knocked it into another item pile, never to be seen again. It's still at large.

The Slinker resembles a dark, flowering plant. The monster consists of four dark-blue petals, which acts as its mouth, and are light-blue on the inside. Each petal also has five thorn-like projections nearing the tip. The petals are connected together by a darker-blue bulb that tapers to a point. The bulb is connected to multiple vines used as appendages, with two vines having a leaf-like structure at the end.

In its uncorrupted form, Chrysocolla looks like its corrupted version only that it has a hump, dark circles in the eyes, it has petals like those of a carnivorous plant (the one below is a beard and the others are similar as if it had hair) and has a robe or dress with a torn skirt

Model Sheet for the Slinker. 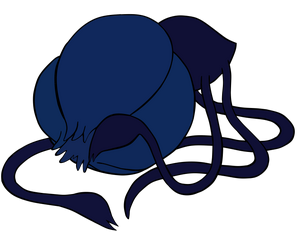 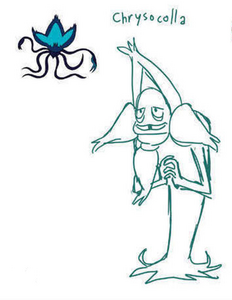 Conceptual design of Chrysocolla in its incorrupt form