Doctor Who: Aliens of London

Hunting and disrobing their preys

Manipulate the human world into launching the nuclear weapons against the rest of the World and tirggering World War III.

Sell Earth's radioactive remains as starship fuel after WW3.
Open the rift there and blow up Earth.
Avenge the Passameer-Days by placing transducers around Earth to absorb the Sun's energy in order to destroy Earth.
Crash the Moon into Earth.

The Passameer-Day branch of the family led by Jocrassa Fel-Fotch Passameer-Day Slitheen attempted to make money out of the Earth in 2006, when they infilrated the British government (though one male member named Sip Fel-Fotch Passameer-Day Slitheen took the disguise of a policeman called Strickland whilst another male disguised himself as Oliver Charles and then General Asquith) and faked an alien invasion. They planned to panic the world and convince the United Nations into gving them the activation codes for a supposed preemptive strike against the alien mother ship. In reality, the Slitheen planned to launch the nuclear weapons against the rest of the World, tirggering World War III. The Slitheen then planned to sell Earth's radioactive remains as starship fuel. They were killed when Mickey Smith destroyed 10 Downing Street with a missle.

A female member of that branch Blon Fel-Fotch Passameer-Day Slitheen survived (as she was able to teleport away before the missile struck) and returned as mayor of Cardiff, she planned to open the rift there and blow up Earth, So she could use a machine called an extrapolator to surf the shockwave to another planet and find any surviving members of her family. She was thwarted by the Doctor and his companion Rose Tyler. She stared into the heart of the Doctor's TARDIS and was reverted back into an egg, which the Doctor took back to Raxacoricofallapatorius so Blon would be given a second chance of life with one of the peaceful families on the planet.

Then in 2008 another branch of the family led by Glune Fex Fize Sharlaveer-Slam Slitheen planned to avenge the Passameer-Days by placing transducers around Earth to absorb the Sun's energy in order to destroy Earth but this plan failed and some of the Slitheen died including Glune (who died after being dosed in vinegar), his brother Kist Magg Thek Lutiven-Day Slitheen and sister Florm Rox Fey Fenerill-Slam Slitheen.

Sometime later, Kist's son Korst Gogg Thek Lutiven-Day Slitheen was revealed to have survived and planned to get revenge with the help of two Slitheen named Dax Fex Fize Slitheen and his wife Bloorm Vungah Bart Slitheen. The three Slitheen joined forces with an Xylok (Sarah Jane's computer Mr. Smith). But after discovering Mr. Smith's true intentions, Korst, Dax and Bloorm joined forces with Sarah Jane and learned that Mr. Smith planned to crash the Moon into Earth to free his fellow Xylok. After Sarah Jane puts a virus into Mr. Smith to forget his plans and gives him a new purpose to safeguard Earth, the three Slitheen leave Earth in peace.

A short Slitheen disguised himself as Ambassador Rahnius and attempted to steal Sarah Jane's robot dog K9, but failed.

It has been revealed that some Slitheen members mingled with members of another Raxacoricofallapatorian family called the Blatereen to create Slitheen-Blathereen, two of them called Leef and Tree appear in The Sarah Jane Adventures episode The Gift.

The Slitheen were Raxacoricofallapatorians from the planet Raxacoricofallapatorius, in the Raxus prime System. Raxacoricofallapatorians were 8–9 ft and were made of living calcium, therefore can be destroyed by acetic acid. They have long forearms and at the end of each claw protruded 3 long talons (females could fire poison darts from them) which possesed great strength. They are very fast, and it has been referenced that they have the most acute smell in the galaxy and can smell prey away for miles. They also possess telepathy, if your prey to these deadly creatures then your dead, they have large eyes to see through the blizzards on Raxacoricofallapatorius, so smoke bombs wont work, and they have super strength and could easily kill victims by strangulation , their long and strong arms are used for swimming in the oceans of their homeplanet.

Raxacoricofallapatorius is home to other races and species as well: Raxweed, bartle trees and other animals, the planet is very blizzardy and has sandstorms and great cities, with governments and police, it has great buildings and skyscrapers reaching the sky. Raxacoricofallapatorius is among the planets in the Federation of Planets, and the Judoon (rhino headed aliens, who worked as Intergalactic police) were after the esteemed criminals the Slitheen.

It also known that Slitheen members are trained to hunt and kill when they are young children. As in the Doctor Who episode Boom Town a female member Blon Fel-Fotch Pasameer-Day Slitheen revealed to the Doctor that she went on her first hunt when she was thirteen whilst in The Sarah Jane Adventures episode Revenge of the Slitheen features a twelve year old male member called Korst appears in a later episode called The Lost Boy.

The Slitheen in Doctor Who and The Sarah Jane Adventures have slight differences from each other. The Doctor Who Slitheen have dull green skin, large feet with short claws on them and their compression fields stick out of the front of their necks. The Sarah Jane Adventures Slitheen have light green skin, smaller feet with longer claws and their compression fields go all around their necks like a collar.

By 2501, the Slitheen had been put out of business by their rivals the Blathereen Family, but are attempting to get back in business.

The Slitheen possess strong powerful arms as they are able to pick up a human with just one arm. They have sharp claws and a good sense of smell. Female members can shoot poison darts from their fingers and can breath out poison gas from their lungs.

The Slitheen used slipscreen compresion fields, to squeeze into human body suits, they looked like metal collars, with colours embedded in the centre. They also used a spaceship, which they 'parked' in the river Thames, the organization U.N.I.T found a 'space pig' on the ship which was a normal Earth pig with technology wired in its head which made it stand on two legs, and it mutated while on the Slitheen ship. 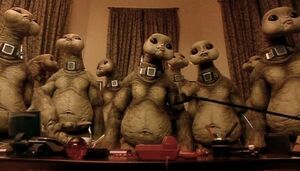 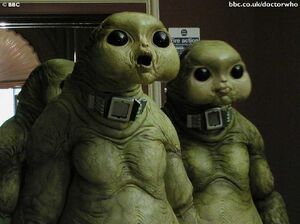 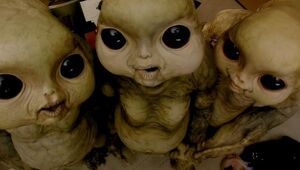 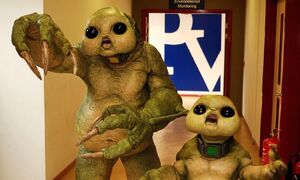 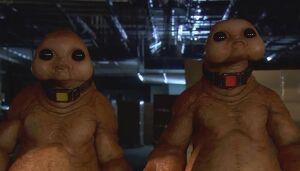 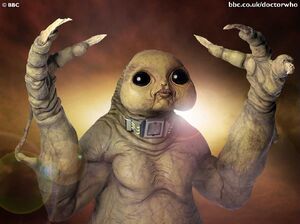 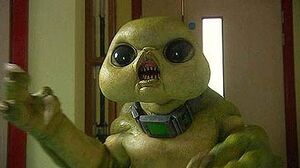 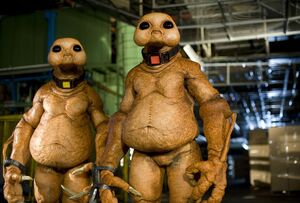 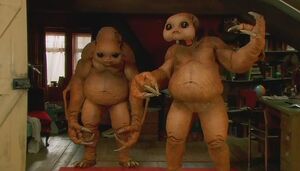 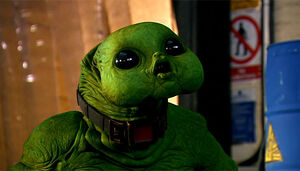 The last Slitheen saw on screen