Commit mass murder of the elephants during the solar eclipse.

Kill Eliza Thornberry for ruining his plans.
Kill Darwin and Donnie for discovering his evil plot.
Kill Debbie if Eliza didn’t tell him how she knew his plains (all failed).

Sloan Blackburn is the main antagonist of Nickelodeon's 9th feature film The Wild Thornberrys Movie. He is the ruthless leader of the Poachers and the husband of Bree Blackburn. He is also Eliza Thornberry's archenemy.

He was voiced by Rupert Everett, who also played Lord Rutledge in Dunston Checks In, Dr. Claw in the 1999 live-action Inspector Gagdet film, Carnaby Fritton in St. Trinians, and Prince Charming in DreamWorks' Shrek franchise.

Sloan appeared as a sociable, civil, charming, big-hearted and animal-loving zoologist, but this was just to disguise his true nature as a callous, stingy, violent, sinister, relentless and sadistic poacher. Sloan and Bree were also prominently behind a poacher plot to take advantage of the migration of over a thousand African Forest Elephants to Timbo Valley during a solar eclipse in order to massacre them by driving them into an electric fence for their ivory.

Sloan is definitely the worst of the two. He shows all the traits of a sociopath, having no empathy for the animals and people he hurts, nor any remorse for his vile deeds. He is even perfectly willing to kill children should they meddle with his plans. He is also very quick-tempered, becoming extremely angry when things don’t go his way and when his plans are thwarted. Sloan is also a very conceited man as he has no courtesy for animals, considering them to be nothing more than dumb creatures, whose only use is to make people, like him, rich. This conceitedness is what leads to his downfall as he underestimated the intelligence of the elephants who ended up bringing down his and Bree's helicopter. This negative view of animals also causes him to hold real zoologists and nature-lovers in contempt, vehemently regarding them as "stupid" for trying to save wildlife instead of using them for profit, like he does. Sloan's only positive trait is his relationship with his wife Bree, whom he genuinely loves and respect.

Sloan and Bree were first seen in a helicopter and kidnapped the young cheetah Talley on the Savannah, though their faces were not shown during the scene, indirectly sparking Eliza's search for Tally and the poachers.

After returning to Africa from England, Eliza unknowingly encountered a rhinoceros whom the poachers had shot his horn, and Sloan and Bree arrived to the scene posing as concerned zoologists. Eliza, Darwin, and Donnie later ran into Bree and Sloan yet again at their camp, and the two allowed the group to stay with them for the night.

However, when Eliza discovered the Blackburns' equipment in their RV along with a captive Tally, Bree and Sloan's evil true colors were revealed, and they took Eliza and her friends captive. Sloan was fearful about Eliza's mysterious pre-knowledge of the poachers' "fence" in Timbo Valley and what else she could know that could threaten Sloan's poaching operation. Before Sloan could interrogate Eliza on what else she knew, Eliza's sister Debbie arrived looking for Eliza. While Bree takes Eliza hostage, Sloan threatened to kill Debbie if Eliza refuses to reveal her source of information. As such, Eliza is forced to admit that she has the power to talk to animals, and that the animals living in the valley gave her the information in the first place. A storm arises, taking away Eliza's powers, and forcing the horrified Blackburns to flee away by chopper.

Later that day, as the poachers prepared at Timbo Valley to use bombs to drive the arriving elephants to stampede into their electrified fence, Sloan oversaw and the operation and gave the orders while Bree pilots the helicopter. They almost succeeded in murdering all the elephants, but their plot was foiled when Eliza managed to stop the elephants and turn them around just before they reached the fence. Enraged at Eliza's heroic interference, Sloan forcefully picked her up on the chopper's ladder and hurled her into a waterfall. Bree and Sloan then tried to shoot the elephants down from in the air as a backup plan, but the elephants pulled their chopper down out of the air by its ladder and destroyed it. Once the eclipse ended, Bree and Sloan were defeated and cornered by the vengeful elephants and arrested by the Congolese rangers for their crimes. 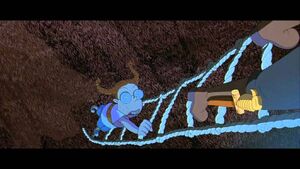 Sloan and Eliza on a ladder. 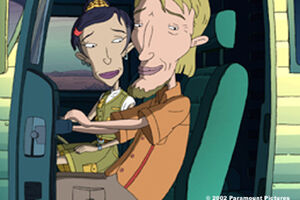 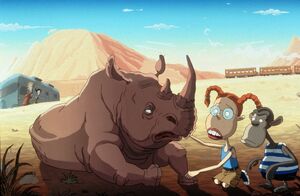 Sloan and Bree running into the "help" of a wounded rhinoceros. 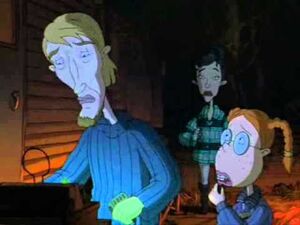 Sloan and Bree revealing their true nature to Eliza. 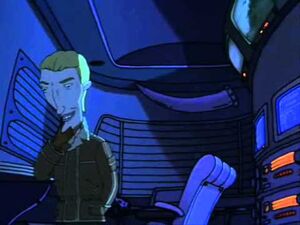 "Here's a question for your famous father: how many volts of electricity does it take to kill a thousand elephants? 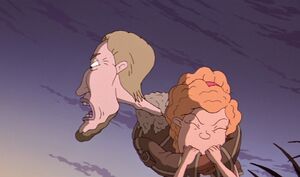 Sloan threatening Debbie's life if Eliza doesn't tell him how she knew of his plan. 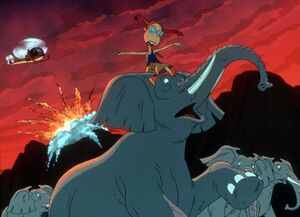 Sloan and Bree furiously witnessing Eliza lead the elephants away from the fence.

Sloan's breakdown "Take down those elephants! I'll take care of the kid!"

"Shame you won't be here to help me carry out the ivory!"

Sloan tossing Eliza into the raging river below.

Armed with a shotgun, Sloan taking aim as he prepares to shoot the forest elephants.

Sloan dropping his gun as the elephants grab and pull the helicopter's rope-ladder.

A terrified Sloan desperately clinging to the helicopter as he begins to fall.

Sloan falling from the helicopter right before it crashes into the cliff.

An utterly horrified Sloan being cornered by the vengeful forest elephants.

Sloan and Bree surrounded by the furious elephants just as the rangers arrive.

Sloan and Bree's defeat as they both arrested by the rangers.

Sloan and Bree dragged away by the rangers, still foolishly trying to save face when they already know what they've done as the elephants look on with pure satisfaction. 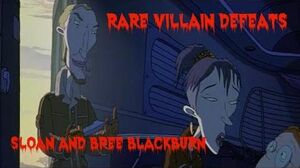