Excavator and Footworker of the Seven Homunculi

Finish his "bothersome" tasks and sleep (all failed).

Sloth is a major antagonist in the Fullmetal Alchemist manga and second anime series. A giant, muscular and dimwitted homunculus who is tasked to do huge works by his peers, he rarely talks or even thinks, as he finds it too tiresome. Like Pride and Wrath, Sloth's appearance greatly differs between the 2003 series and the true manga and the 2009 series.

He was voiced by Fumihiko Tachiki in the Japanese version, and by Patrick Seitz in the English version.

Sloth is the fifth homunculus and the least seen in the series. He is a gigantic homunculus, standing way over three meters tall, with long black hair, a massive, muscular frame and sharp teeth, with a red line that covers his right arm and the right side of his face, eye included, and he sports his Ouroboros mark on the right shoulder-blade.

True to his name, Sloth is entirely defined by his extreme laziness, wanting nothing more than sleeping day in and day out. He has a slow wit and rarely speaks, as thinking or even talking is too much an effort. So he follows Father's orders without question, speaking only to complain or to claim that he would like to die, but it would be too tiresome. Yet his formidable strength comes in handy, and he has to take care of the huge tasks.

Sloth lacks flashy powers. He is by far the physically strongest, crushing someone into a pulp by merely smacking, tossing a tank like a ragdoll and digging through stone effortlessly. He can uses the chains on his wrists like flails. He also seems immune to damage, shrugging off mortars. Only alchemic spikes and blades can pierce his steel-hard skin, though his eyes and the inside of his mouth are vulnerable, and he can be frozen by intense cold.

In spite of his enormous size, Sloth is extremely fast. He hurls himself at his target like a devastating missile, faster than the eye can see. His charges lack accuracy but he can widen their range by spreading his arms and legs.

Sloth first appears when Edward and Alphonse Elric travel to Briggs Fortress in the northern mountains of Amestris. Sloth has spent the last decades digging an underground tunnel following the country’s border, which Father plans to use as a nationwide transmutation circle to sacrifice the entire population to become the new god of the Fullmetal Alchemist world. In his task, he is constantly watched over by Pride's shadow.

However, Sloth accidentally dug too high and ended up storming in the fortress' basement. There, as he was trying to find out where he was and wreaking havoc in his path, he was mistaken for a secret weapon from Drachma, the hostile neighbor nation, and attacked by the soldiers under the command of Major General Olivia Armstrong. Given that not even a tank was enough to phase the dim-witted giant, it took cooperation from Olivia Armstrong, her most devoted subordinates and the Elric brothers to douse him with gas and expel him outside the fortress, where the searing cold froze the gas and completely paralyzed him.

Unfortunately, the homunculus Wrath, who rules Amestris under the alias of King Bradley, sent one of the corrupt rulers, Solf J. Kimblee, of the Central Military Headquarters to Briggs, where he gave orders to set Sloth free and to guide him back into the tunnel; which Sloth completed sometime later while Major General Armstrong, who killed the corrupt general to take his place, successfully infiltrates the highest spheres of influence Amestris.

Sloth is next seen serving as Father's personal bodyguard, going with him when he personally takes command of Amestris after Wrath's disappearance, and sleeping next to Father's throne when he has nothing else to do.

During the final battle, Sloth is sent to kill Major General Armstrong after she killed one of the corrupt officials and took another one hostage, while her troops from Briggs are invading the Central Headquarters. Sloth clumsily kills Armstrong's hostage while attempting to crush her from behind, and she fearlessly engages a fight.

Armstrong manages to wound Sloth several times by striking him in the forehead but she finds herself in a dangerous situation and gets helped by her younger brother, the alchemist Alex Louis Armstrong. They manage to rally the soldiers sent to kill them to their cause and to fend off the giant homunculus for a while, but he eventually uses his speed-powered "human missile" attacks and drives them into a corner. The tide turns for the last time when Izumi Curtis, a very powerful alchemist and the Elrics' master, enters the fray alongside her (very muscular) husband Sig.

Both Sig and Alex to pummel him with an onslaught of synchronized blows, showing off their manly muscles and gloating of their physique (as the two's muscle is what started their friendship), while they take on fellow muscleman, Sloth, before throwing him on huge alchemic spikes. Sloth disintegrates, stating that living was definitely too tiresome for him. 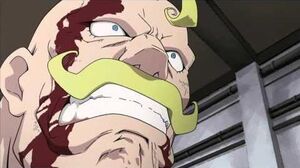