To live in a luxurious life by taking over the Castle of Friendship for life (failed).

Greedy Usurper
Sludge is a minor antagonist of My Little Pony: Friendship is Magic who first appeared in the season 8 episode "Father Knows Beast" as the main antagonist.

In the episode "Father Knows Beast", Sludge first appeared falling out of the sky like a fireball and crash-landing in Ponyville, which she met Spike and Smolder. Spike take him to Castle of Friendship. As the Mane 6 offer him to stay, he initially refused at first, but accepts as they nurse him back health.

Before departing to Ponyville, Sludge shows how happy Spike is for making so many friends in Ponyville and reveals that he is Spike's father. He tells a story of how Spike was orphaned as an egg, and the two proceed to have father and son activities. After that, he suggests that Spike should do it like a real dragon. Because of this, Sludge takes over Spike's bedroom and make Spike do everything for him by doing chores.

After Smolder suggesting to Spike, they are trying to move him away. Panicked, he angrily confesses that he is not Spike's father and only pretending so he could live in a luxurious life, just like all dragons does. Because of this, Sludge leaves the Ponyville instead. 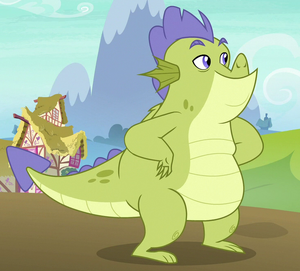 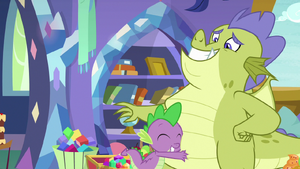 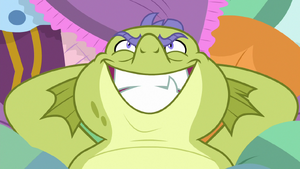 Sludge's sinister grin.
Add a photo to this gallery

Retrieved from "https://villains.fandom.com/wiki/Sludge_(My_Little_Pony)?oldid=4188379"
Community content is available under CC-BY-SA unless otherwise noted.