Kill Yuji Kiba and his friends for being "traitors" (failed).

The Wild Boar Orphnoch was one of the Orphnochs summoned by Smart Lady to deal with the human resistance members who broke into the Smart Brain building and attempted to steal the "Emperor's Belt".

Accompanied by the Wild Boar Orphnoch and the Pelican Orphnoch, the Slug Orphnoch walked in on Kyoji Murakami's conversation with Yuji Kiba and the renegade Orphnochs office. The three asked Murakami for permission to kill Kiba, calling him a "traitor" to the Orphnochs for associating with humans. The Slug Orphnoch then assumed his Orphnoch form along with his companions to deal with Kiba but Murakami summoned Leo and told him to go kill them to demonstrate his powers. Leo transformed into Kamen Rider Psyga and destroyed both the Wild Boar and Pelican Orphnochs with his Phone Blaster Burst mode, causing the Slug Orphnoch to run away. However, Psyga chased him down and killed him by snapping his neck.

The Slug Orphnoch was among many other revived monsters who were part of the Dai-Shocker army in the World of Decade that fought a gathering of 25 Kamen Riders. 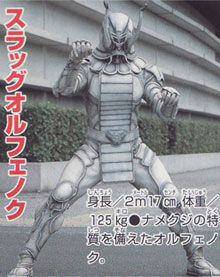 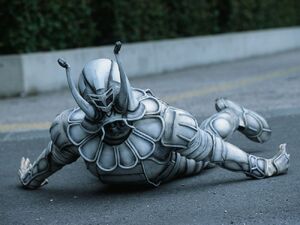 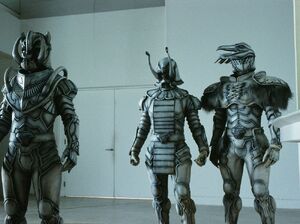 Retrieved from "https://villains.fandom.com/wiki/Slug_Orphnoch?oldid=4176206"
Community content is available under CC-BY-SA unless otherwise noted.