Sam Sinister, later known as Slyboots, was a villain in Adventurers Egypt theme. He was the partner of Baron von Barron. Both of them were out to follow Johnny Thunder and get the treasure for their own uses before he could. Sinister's personality was never expanded on much, and he dropped out after Egypt, with Baron von Barron becoming the main villain.

When the Dino Island theme came out, the Baron was now named Sam Sinister. When Orient Expedition was released, Sinister donned a new outfit which seemed to combine elements from his original and Slyboots'. This whole situation has caused much confusion, leading to LEGO joking about it in the bios of the Detective. 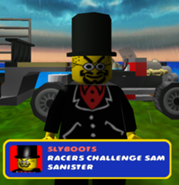 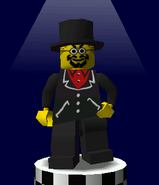 Add a photo to this gallery
Retrieved from "https://villains.fandom.com/wiki/Slyboots?oldid=3585812"
Community content is available under CC-BY-SA unless otherwise noted.