Wipe out humanity by either turning them into Orphnochs or killing them.

Smart Brain is the company that manufactures the Rider Gears and the main antagonist faction of Kamen Rider 555. Secretly, they are a front for a group of Orphnochs that see themselves as the master race and seek to increase the Orphnoch population as well as wipe out the entire human race. By the start of the series, they have gained a global monopoly on most electronic and vehicle trade. They are the largest coordinated group of Orphnoch seen in the series.

In the movie Kamen Rider 555: Paradise Lost they seem to have formed a world government following the Orphnoch revolution and use their army of Riotroopers to wipe out any remaining humans.

Smart Brain was originally run by Hanagata until he was ousted by Kyoji Murakami so he could seize control of the company and turn it into a front for the Orphnochs' genocide of humanity. Hanagata later managed to reclaim his company from Murakami and gave it to Yuji Kiba. However, having lost his faith in humanity after the death of Yuka, Kiba begins working to awaken the Arch Orphnoch, though he eventually regains his senses and fights alongside Faiz to bring the Arch Orphnoch down.

In the alternate conclusion shown in this movie, Smart Brain has become the dominant world power following the Orphnoch revolution and genocide of humanity, with squads of Smart Brain's Riotroopers now working to eliminate any surviving humans. 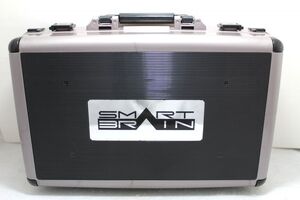 A briefcase with the Smart Brain logo on it.